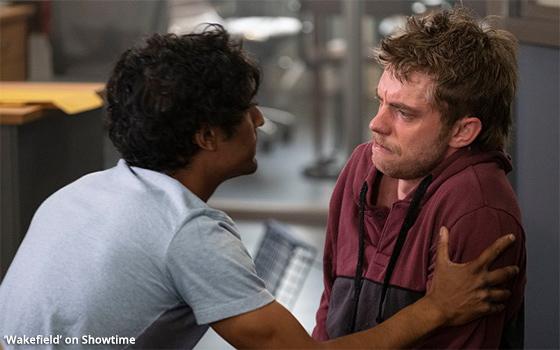 If I take issue with anything concerning the new Showtime series "Wakefield," then it is the manner in which the show is positioned in Showtime’s publicity material.

It is described there as a drama but with "comedic" elements. If the latter is true, then the funny parts eluded me when I watched the first episode of this show on Friday.

Specifically, the description positions "Wakefield" as "a psychological drama that shines a comedic light on what happens when the sanest individual working in a psych ward begins to lose his grip."

My own take on this show is that comedy has nothing to do with it -- not even comedy of the darkest variety that characterizes so many of our TV comedies today (something the TV Blog has complained about many times).

In some ways, it is not inaccurate to compare it to "One Flew Over the Cuckoo’s Nest," the 1975 movie that explored some of the same issues as "Wakefield."

The general theme of both seems to be: who’s crazier -- the mentally ill patients residing in a psychiatric hospital, or all the rest of us?

The central character among many in "Wakefield" is Nik (played by Rudi Dharmalingam, above photo, left).

He is one of the caretakers in a ward of a psychiatric hospital, the Wakefield of the title. As such, Nik finds himself ministering to some of the patients in ways that are above his pay grade, since he is not a psychologist or psychiatrist.

He is the "sanest individual" in this workplace, who is mentioned in Showtime’s description of the show above.

In Episode One, we meet a few of Nik’s co-workers, including a unit manager (and Nik’s superior) who suffers from a compassion deficit when it comes to others, be they patients or co-workers.

She might even be said to be this show’s Nurse Ratched, but the comparison is partial at best -- as is any comparison to "One Flew Over the Cuckoo’s Nest."

This is because "Wakefield" stands on its own as a product of its time, much like "Cuckoo’s Nest" did when Ken Kesey’s novel was first published in 1962.

At various points in Episode One of "Wakefield," the line between sanity and insanity is thin indeed, as some of the patients at first seem to be among the sane, but then are revealed to be otherwise.

In this way, "Wakefield" keeps a viewer guessing and on his toes. Unlike so much of scripted television that is so predictable that I find myself sometimes reciting lines before they are uttered, "Wakefield" goes in unpredictable directions.

It also takes up surprising motifs such as, in the first episode, a recurrence of the 1982 Dexys Midnight Runners song "Come On Eileen."

But, due to the TV Blog’s strict "no spoilers" policy, how or why this song is significant to the plot of "Wakefield" is something you will have to watch the show yourself to find out.