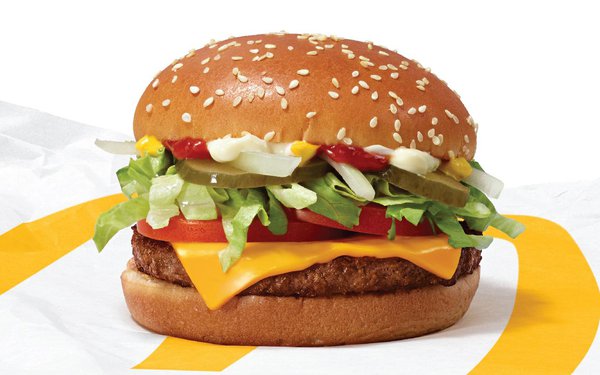 McDonald's is taking a few more baby steps toward the plant-based future, announcing plans to test the McPlant burger in eight U.S. restaurants, starting next month.

The eight stores are located in Texas, Iowa, Louisiana and California.

The company has already tested the veggie burger in some Canadian stores. It’s also been available on a limited basis in Sweden, Denmark, the Netherlands, Austria and the U.K.

But while the U.S. pilot indicates the QSR giant is feeling more positive about a broader rollout in the U.S., the tiny scope of the test speaks volumes about the company's continuing streak of caution re the McPlant.

Meanwhile, rival Burger King has been selling its Impossible Whopper for over two years. And Jack in the Box just announced it would begin testing an Impossible Burger, as well.

McDonald’s slow start has some observers wondering if the fast-food giant will keep up with its rivals, especially among the younger consumers that make up much of its audience.

A new report from Cowen finds that while 19% of American consumers describe themselves as flexitarian (meat-eaters who also regularly eat vegan or vegetarian meals) the number of those calling themselves “meat-eaters” fell from 85% in 2019 to 71% in 2021. That’s driven by the Gen Z cohort, with 65% saying they’re looking for a more plant-based diet, and 79% saying they would eat meatless meals once or twice a week.

The meatless craving is following shoppers to the supermarket as well, with a new report from Deloitte reporting that 50% of all U.S. shoppers now say they are interested in either fresh or frozen plant-based alternatives to meat, up six percentage points from last year.

McDonald’s cooked up the McPlant in an exclusive partnership with Beyond Meat. The two companies began collaborating back in 2019, and in February, signed a three-year deal naming Beyond Meat as the QSR giant’s preferred partner for McPlant.

Although the patty is made from peas, rice and potatoes, it “has the iconic taste of a McDonald’s burger, because it is one,” McDonald’s says in its announcement.

Plant Based News reports that, unlike the U.K. version, the U.S. version is likely to disappoint some vegans. It will be cooked on the same equipment as meat products, and also served with non-vegan cheese and mayo.

Beyond Meat also has deals with such QSR rivals as Yum! Brands, which owns KFC, Pizza Hut and Taco Bell, as well as A&W. And besides its plant-based beef, it is leaning heavily into restaurant partnerships for its plant-based chicken. It is also continuing an aggressive rollout into supermarkets, including a recent deal with Sam’s Club.

In its most recent quarterly results, the El Segundo, California-based McDonald’s posted record quarterly sales, with revenue rising to $149.4 million, an increase of 31.8% from the prior year. But its losses mounted too, rising to $19.7 million, compared to a loss of $10.2 million in the second quarter of last year.