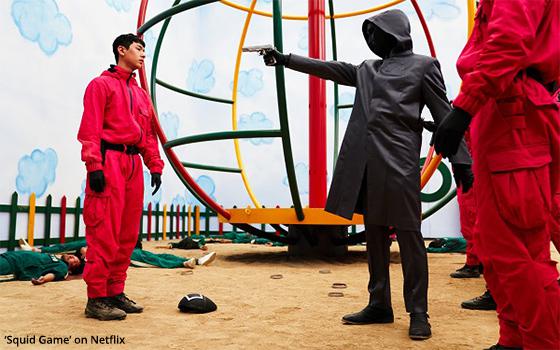 In a conversation not long ago, a very wise man offered his opinion that our culture is sick.

Violence more than graphic sex is the greater subject here because violence in so many forms is such a common feature today of the explosion in drama content that we have been witnessing and consuming for the past decade or more.

This preamble brings me to “Squid Game,” the intriguing nine-episode series from Korea that has been on Netflix since September 17.

Since then, it has garnered a series of headlined stories in which it is positioned as a cultural phenomenon, and more importantly to Netflix and its bottom line, a driver of new subscriptions.

According to news stories this week, Netflix added 4.4 million subscribers (or memberships) in the third quarter of this year, exceeding its hoped-for projections of 3.5 million for the three-month period. Netflix says its total worldwide subscriber count now stands at 213.6 million.

Netflix did say that “Squid Game” has emerged as the most popular show it has ever offered, which is no mean feat.

All that popularity does not mean everyone in the world has yet seen “Squid Game.” But since so much of TV is no longer linear (i.e., schedule-dependent), Netflix subscribers can catch up with “Squid Game” any old time, at least just to sample it.

That’s what the TV Blog did this week with the goal of understanding and then venturing something like a theory that might explain this show’s current status as a “worldwide phenomenon.”

After watching the first episode yesterday of “Squid Game,” from which I got the gist of it, I must admit I have no idea how this show, or any show, suddenly pulls ahead of all others to earn the “worldwide phenomenon” label.

This is not to condemn “Squid Game” at all. In fact, there is much about the show that is recommendable. It is very well made.

Its story is highly original and imaginative. As such, it must have presented a huge challenge for its producers, directors, writers and actors, and yet, they made the whole thing seem plausible.

Summarizing this show’s central storyline is not easy. The “Squid Game” of the title is shown and explained in the very first sequence of Episode One.

It is (or was) a sandlot child’s game in Korea in which opposing teams try to force members of the other team outside the borders of an area drawn into the sandy ground that is supposed to resemble a squid. Those who are pushed out of this area lose.

This relatively simple child’s game, however, evolves into a more deadly game, or series of them, which a group of more than 400 unsuspected people have been shanghaied to participate in.

The one thing they all seem to have in common: They are all in hopeless states of indebtedness and stand to win the money they need to pay off their debts -- if they don’t get killed in the process.

In Episode One, we see for the first time the vast facility where these games are to take place. It is an elaborate place, beautifully rendered by the show’s designers.

It seems to be presided over by a mysterious figure who watches the games, and their resultant carnage, from a plush living space while sipping whisky.

This is all fine and good, but I still do not really understand why this show is currently standing above all others in world popularity and social-media chatter (according to the claims of journalists).

To return to the subject raised at the top of this TV Blog, the violence of the game we get to see in Episode One makes “Game of Thrones” seem like “Mister Rogers’ Neighborhood.”

It is a violent gorefest on par with the head-smashing massacres in which surviving humans destroy marauding zombies on shows such as “The Walking Dead.”

But those are zombies. In “Squid Game,” the figures whose blood is being splattered all over the place are real human beings. I still find scenes like this difficult to watch, but increasingly I am in the minority.

For here we have a TV show that traffics in this kind of extreme content and it is now, supposedly, the most-watched show on the planet. Go figure.