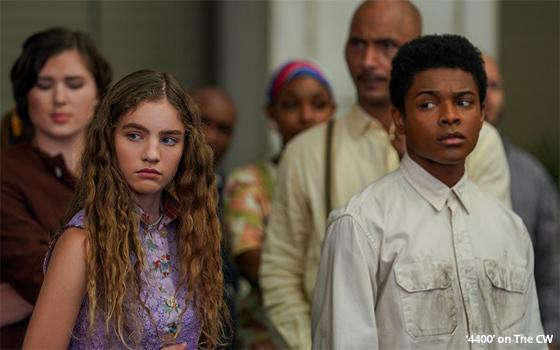 In this new version coming to The CW on Monday (titled simply “4400,” the word “The” having been excised), the victims in the show’s central story -- the abduction of 4,400 people from different historical time periods by alien visitors from outer space -- are predominantly African-American.

Thus, when all 4,400 of them are suddenly returned to Earth with no awareness of where they have been or how long they have been gone, the opportunity arises for the show to make all kinds of woke comparisons between the race-relations histories of yesterday and today.

Predictably, in this telling, the racial strife of today is seen as equivalent to the suffering from discrimination (and worse) that went back for many generations and then was followed by years of hard-fought struggles for civil rights after World War II. This is an equivalency with which I happen to disagree.

Where this TV series is concerned, its focus on racial history, as reflected in the plights of people abducted by aliens, has the effect of sucking the air out of the show.

In addition, in some scenes, the show’s depiction of white people -- and indeed, its whole attitude toward them -- is dismissive, one-dimensional and insulting. One white character is even seen apologizing for being white.

This is not to say the show should not include considerations of race as it leapfrogs back and forth between the past and present.

The original series, “The 4400,” which ran on USA Network for four seasons (2004-07), built a variety of storylines around various abductees, one of which was a race storyline centered on an African-American man who was abducted in 1951.

The character, Richard Tyler, was played memorably by Mahershala Ali (who then went by the name of Mahershalalhashbaz Ali), a breakthrough role for the actor, who later won two Oscars.

The character figured significantly in one of the best-made sequences I have ever seen put together for a TV show.

It happened near the conclusion of the first episode of “The 4400,” a montage in which we got to see how various characters were trying to reenter a contemporary society that they did not recognize or understand.

Accompanied by the haunting song “Worry About You” by Ivy, the black Tyler character from 1951 is seen sitting in a modern-day diner with a bewildered expression on his face as he surveys this scene of young white and black people, many with tattoos, nose rings and other pierces, sitting completely at ease with each other.

At one point, he contemplatively lights a cigarette, only to have one of the young men gesture silently toward a “No Smoking” sign.

The Tyler character then peers into a cracked mirror on the wall of his booth -- his perplexed reflection appearing with the mirror’s crack running horizontally across it, an artful metaphor for the alienation he is feeling.

No such art is attempted, much less achieved, in the dreary new version of the show. Instead, the sense of mystery and wonder that were hallmarks of the original are conspicuously absent from the new one.

In their place: A lot of airless, simplistic messaging about race history. And where’s the fun in that?