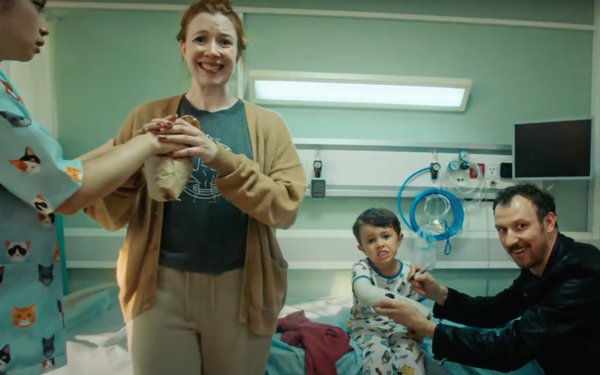 As Shutterfly heads into its busiest season, it's not just cranking out whimsical family photo cards. It’s also continuing its transition from a company that puts photos on mugs and T-shirts to what it hopes will be a modern customization machine.

The Redwood City, California-based Shutterfly is trying to charm its customers as it moves along, with a funny new brand campaign, a collaboration with The Onion, and a collection with Marie Kondo. D2C FYI asked Craig Rowley, chief marketing officer, to catch us up.

D2C FYI: You launched the new campaign earlier this month. How is it working?

Craig Rowley: We're pleased so far, but it's very early days. This is the first time we're doing something that's not just showing up [during the holidays]. And you can't get from a TV commercial to exactly how many people are going to shop.

Still, metrics around click-through rates and engagement are up. In a few weeks, we'll introduce new holiday-themed ads, and they'll feel very much like a part of the larger campaign.

D2C FYI: You mentioned that you want to see Shutterfly move beyond personalization and into something bigger. Can you explain?

Rowley: We know that most people, given the option, want to choose something more bespoke, more customized. They are less likely to want something off the rack and want to make it personal. That's a powerful motivation, and our platform will be able to serve that better and better over time.

Traditionally, that's meant being able to put a photo on anything -- and we have great tools for that. But our campaign showcases many different ways to personalize.

D2C FYI: How are collaborations a part of that strategy?

Rowley: We're trying to drive this idea that you can make all these different things, which means surrounding customers with choices. We have some collaborations I'm excited about for the holiday season. There's a great partnership with Marie Kondo that just launched, with a beautiful aesthetic.  And we have fun things, like a partnership we're launching with The Onion. You're going to see more of that from us as we go forward.

People are more interested in expressing things that are funny, with these unique sentiments. People are much more playful with their cards than they have in the past.

D2C FYI: Speaking of Spoonflower, it's been a few months since the acquisition. How does that fit in?

Rowley: With Spoonflower, we are bringing in the design community. You can make table runners, napkins, pillows. You can fill your whole world, choosing from thousands of designs. Our acquisitions are accelerating that, creating endless possibilities. We intend to own this space of customization.

D2C FYI: How are holiday sales shaping up so far?

Rowley: We're excited. We do research every year, and this year's report says roughly half of Americans will receive a Shutterfly holiday card -- about 165 million cards. We're anticipating we'll make about 10 million photo books and get about nine million gift orders. Home décor is also ncreasingly popular.

D2C FYI: So more people are sending cards this year?

Rowley: Yes. Overall, it's up about 10 percentage points. Another shift is that more younger people are planning to send cards, with 40% of 18-to-34-year-olds planning to send a holiday or personalized photo card.

As we've evolved our offerings, these cards welcome more people -- even people without families. Lots of people now send photos with their pets, for example.

D2C FYI: Do you see Shutterfly as an ecommerce brand, a D2C brand, or both?

Rowley: We're similar to other ecommerce brands and one of the largest ­in the top 40 or 50. Product experience is significant, so we're constantly evolving. We've got an app, which has high conversion rates.

But we also think like retailers, in that we are governed by occasions like Mother's Day and Father's Day. And we're also more like a tech brand because so much of what we do centers around the way you make something. That experience is so important -- I think that's why our Net Promoter Scores are higher than our competitors’.