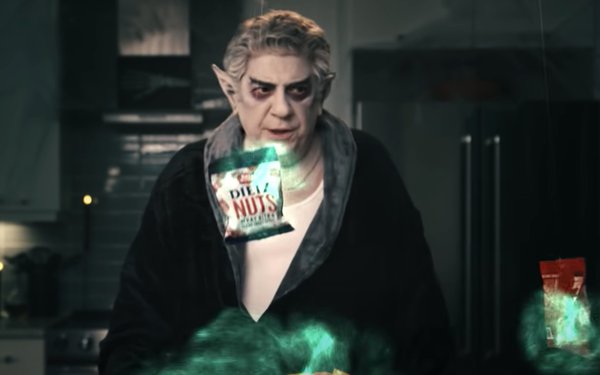 That’s probably what “The Sopranos” mafioso Salvatore “Big Pussy” Bonpensiero would say if he ran his own cooking show.

In a Halloween-themed campaign, Pastore takes center stage as the “Gabaghoul,” which is a nod to Tony Soprano’s favorite Italian cold cut: capicola—AKA gabagool.

In videos from the Red Tettemer O’Connell + Partners agency, the ghastly gourmand offers up his best food tips and tricks for spooky entertaining.

This 60-second outtakes video opens with the Gabaghoul explaining that “As far back as I remember, I always wanted to be a chef.” When something goes awry, he exclaims “Mother!” and then mouths the F word—before things get even crazier on the set.

Other unexpected food-prep mishaps include a bat making off with one of his hot dogs. In another spot, salty snacks eerily emerge from a bowl.

“When it came time to cast, Vincent Pastore was a natural wiseguy fit given how much gabagool was embraced on ‘The Sopranos’.”

Moreover, “The timing worked out perfectly with the release of the ‘Many Saints of Newark,’ when everything Sopranos was top of mind,” O’Connell adds in a reference to the 2021 crime drama film.

Campaign ads direct consumers to the blog on the Dietz & Watson website, where they can learn about such Halloween meat and cheese recipes as a Spooky Charcuterie Board, Mummy Dogs and a Snackable Skeleton.

It’s currently enjoying a resurgence of viewing by a wide range of demographics.

According to HBO, the show has had its overall streaming hours triple during the pandemic, as reported by The New York Times.