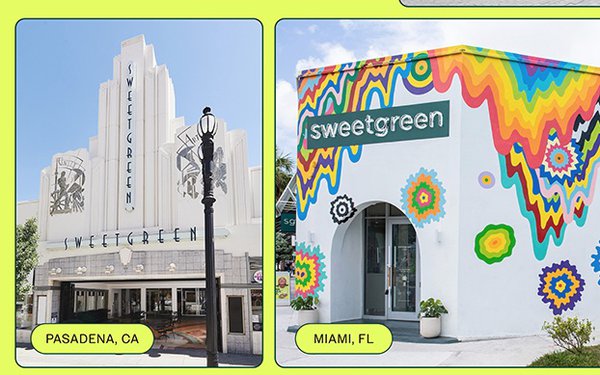 With a stated mission of “connecting people to real food,” fast-casual restaurant chain Sweetgreen hopes to roughly double its 140-unit footprint in the next three to five years with an initial public stock offering.

The Los Angeles-based company—which began life in 2007 as a 560-square-foot restaurant launched by three college students in Washington, D.C—had 29 locations at the end of its fiscal year 2014, according to an IPO document filed Monday.

The plant-based, organic-focused chain operates mainly in large urban areas like New York City, Los Angeles and Boston along with Washington D.C./Maryland/Virginia. As recently as Sept. 26, 33% of its revenue was generated in the New York City metro area.

The filing did not disclose how many shares the company plans to offer or the IPO’s expected per-share price range.

One of Sweetgreen’s touted points of differentiation is approximately 40 freshly prepared or cooked ingredients that are used to create “unique, customized” orders.

“The industrialized food system has enabled large chains to design menu items optimized for production efficiency at the cost of nutrition and long-term health,” the filing states.

“At Sweetgreen, our food is still fast but our menu may taste different in different cities because we work with more than 200 domestic farmers and producers across the country.”

“We are still in the very nascent stages of our journey. We plan to open at least 30 domestic, company-owned restaurants in 2021 and to approximately double our current footprint of restaurants over the next three to five years.

In addition to its own digital channels, Sweetgreen uses such third-party delivery marketplaces as Caviar, DoorDash, Grubhub, Postmates and Uber Eats.

Conversely, the chain also sees these companies as competitors—as noted in the Risk Factors section of its filing: “These food delivery marketplaces own the customer data for Sweetgreen orders placed on such marketplaces and may use such customer data to encourage these customers to order from other restaurants on their marketplaces.”

Store design is a key component of the chain’s marketing.

“We purposefully design our restaurants to become iconic locations within each community we serve,” choosing high-traffic, popular locations “so that they can serve as billboards.”

Sweetgreen says it has more than 500,000 followers on social media. “Social media allows us to tell deeper stories around our supply chain and our recipe development and connect with influential creators that speak to our mission.”

The chain also has partnered with chefs, musicians and athletes—the most recent being Japanese professional tennis player Naomi Osaka.