Giving Raisins At Halloween? There's A Clean-Up Kit For That 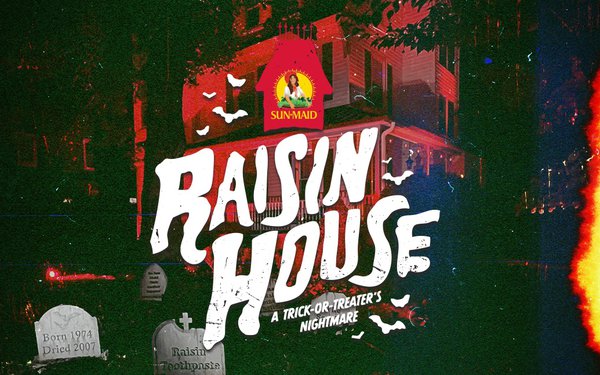 This Halloween, Sun-Maid raisins is embracing the holiday by rewarding kids who embrace their status as their neighborhood’s “raisin house” -- the house that offers raisins as a treat to trick-or-treaters -- by offering “clean-up kits” that help de-egg and collect all of the toilet paper that will be deposited on the property.

Since announcing the program on TikTok, Sun-Maid’s following on the network has grown 3,200% in the past week. Sun Maid also announced a $5,000 prize for a fan who shares what a Raisin House means for them.

With raisins long derided as a second-class treat, Sun-Maid is attempting to embrace the fruit's status as a Halloween also-ran. Hence the clean-up kit giveaway.

“We know there are a lot of occasions for eating better-for-you snacks like whole fruit raisins — we just recognize that Halloween certainly isn't the preferred time,” Harry Overly, president and CEO of Sun-Maid, said. "This year we're acknowledging that there's perhaps nothing scarier than getting raisins on Halloween — except being the house that hands them out. We look forward to finding our place in the pantry and lunchboxes as soon as the stomach aches from all of the candy go away."

The effort was led agency Quench, which has offices in New York, Atlanta, Harrisburg, Pennsylvania and Philadelphia.