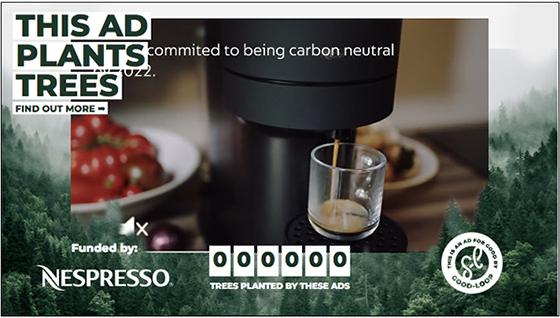 Nespresso UK, the British unit of the Swiss manufacturer of coffee machines and one-cup brew capsules, is teaming up with Guardian Labs, the Guardian’s branded-content division, on a new marketing effort intended to underscore its sustainability efforts.

The campaign, which launched over the weekend, was devised by Zenith, the marketing and communications agency. Last year, Nespresso pledged every cup of its coffee will be carbon neutral by the end of 2022. Nespresso, a press statement noted, has been integrating sustainability into its operations and throughout its supply chain for over 30 years.

In addition, the brand believes that coffee can be a force for good.

Throughout the supplement, there will be several three-page and double-page spreads. Alongside this, the magazine itself will feature immersive articles and other content throughout.

“Guardian readers tend to tune into an ethical agenda, paying attention to the origin of products while also supporting environmentally friendly products, Bruce McGowan, head of content partnerships at Zenith UK, stated. “That’s why partnering Nespresso with the Guardian Labs in this campaign was the clear way forward.”

In addition to the Guardian Labs campaign, Zenith is supporting the Nespresso partnership with video ads on YouTube, all of which are running through global ad tech platform Good-Loop.

Through the company’s brand new “This Ad Plants Trees’ format, every time someone watches these ads, it unlocks a free donation to fund tree planting around the world. Good Loop will plant at least 136,217 trees as a result of this campaign alone.