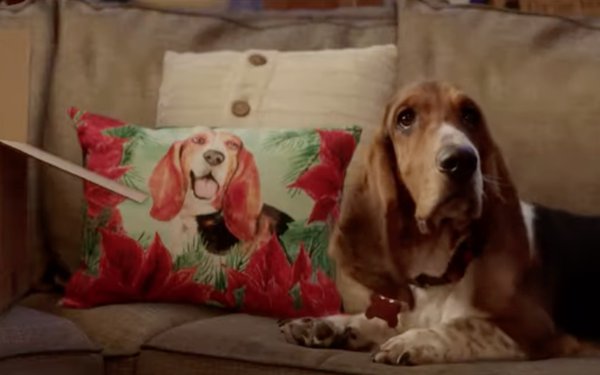 Image above from Wayfair's Christmas spot, focused on a new widower whose home-improvement purchases included a pup-themed pillow.

Coming off tough pandemic-fed comparisons, Wayfair says its sales dropped 19% in the third quarter, falling to $3.1 billion. While it says consumers are nesting less and supply shortages are impacting sales, the retailer sees improvements ahead on both fronts.

Wayfair confirmed the ecommerce brand is indeed inching its way toward a physical retail presence, along with rolling out a new video commerce content approach to better engage its consumers.

It also took the wraps off a sweetly sentimental new holiday spot that showcases an older man’s commitment to making a family celebration following the loss of his wife.

In announcing its quarterly results on a conference call webcast for investors, the Boston-based company says sales in the U.S. fell 20.8%, to $2.6 billion. It reported a loss of $78 million, compared to net income of $173.2 million in the third quarter of last year.

“As various geographies reopened post-pandemic, consumers naturally shifted some spend toward travel and entertainment and from ecommerce towards brick and mortar,” said Niraj Shah, CEO, co-founder and co-chairman, in the announcement. “Demand and interest in the home remain resilient, but it will take a few more quarters for our growth -- and ecommerce growth in general -- to get back to normal.”

Wayfair has historically opened the occasional pop-up store and temporary showrooms in malls, but resisted the trend of ecommerce brands opening physical stores. Shah confirms that’s changing and the retailer is laying the groundwork for more omnichannel expansion.

Wayfair is exploring physical retail by testing “a number of formats,” he says, including all of its brands. In addition to Wayfair, which focuses on low prices, it owns the more upscale Joss & Main; AllModern; Birchlane, specializing in classics; and Perigold, with a wide selection of luxury items.

The company plans to launch these concepts and “see how they perform in the real world.” Shah points out that Wayfair has already built its brand and amassed a large market, as well as a vast delivery system. “So if you get that store right, it becomes quite a nice leverage point.”

Wayfair’s falling sales aren’t particularly troubling to some observers. “On a two-year basis, revenue is up by an impressive 35.4%, and active customer numbers have expanded by 53.2%,” writes Neil Saunders, managing director of GlobalData, in his comment on the results. “This indicates that Wayfair has held on to quite a lot of the gains it made during the pandemic and now has a much wider audience for its products.”

Saunders does worry, however, that the category may suffer in the year ahead. “The danger is that, as consumer finances come under pressure and as other activities such as travel resume, spending on the home will be deprioritized, and overall demand will dip.”

He adds that the company’s ongoing struggle to maintain profitability and control massive marketing spending is a problem.

“The source of much of this woe is advertising costs, which over the past 12 months have topped $1.4 billion,” he says. “As the market slows and as consumers become more reluctant to spend on home, it is likely that Wayfair will need to advertise even more to protect sales,” leading him to “a very sober outlook.”

The company is introducing Wayfair On Air, an immersive video commerce experience that will help consumers find their favorite products. The content series is available on its app and features episodes with design ideas and solutions, along with exclusive deals.