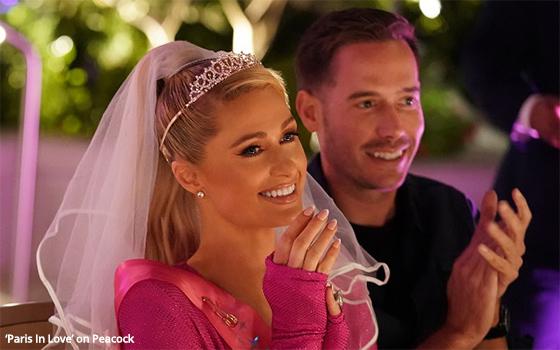 The last time I saw Paris she was dressed to the nines and cavorting in the kitchen with Kim Kardashian.

This was last August in a new cooking show called “Cooking With Paris” in which Kim did most of the prep work and then the cooking.

Meanwhile, Paris -- Paris Hilton, that is -- pretended that she didn’t know what a pair of tongs was used for.

Now, after just a little over three months, Paris is back on TV in another new series called “Paris In Love” in which she complains about all of the attention she contends with wherever she goes, from fans, news media and paparazzi.

This is often one of the more obvious ironies of these kinds of reality shows built around a famous media figure.

They agree to do a show of this type -- or, in the case of Paris Hilton, more than one at the same time -- and then complain they have no privacy.

News flash: If one goes on TV, while also actively cultivating constant attention from every other medium too, then one should not complain about a lack of privacy.

However, this is a common theme in shows like “Paris In Love” -- the media star who is supposedly using a docuseries to get up close and personal with her fans.

If that is the case here, and the “real Paris” on display in this show is authentic, then the real Paris is about as vacuous as a child’s balloon.

The “Love” part of the show’s title refers to Paris’ current relationship with a man named Carter Reum, who is described as a venture capitalist.

He too says in the show that he habitually shuns the limelight -- right up until the moment, apparently, that he agreed to appear in a TV show about his intimate relationship with Paris, their engagement and their wedding.

The wedding is reportedly scheduled for the same day that this show is set to make its debut on Peacock -- today (Thursday, November 11), as a matter of fact.

Thus, the show is about the run-up to the big day complete with Paris shopping for extravagant wedding outfits, only one of which is a wedding dress.

The others are for all the changes she plans to make during the wedding day -- something like 11 of them.

During the show, we hear Paris -- now 40 -- expound on all the jitters she feels about finally settling down with “the one” after a life-time of devil-may-care jet-setting.

Paris Hilton settling down as a middle-aged Beverly Hills hausfrau? I wouldn’t bet on it.

While watching the show, you cannot help but form the impression that the whole thing is a put-on. And while you are thinking that, you are also beholding the spectacle of Paris and her lifestyle.

Paris Hilton, heiress to the Hilton hotel empire built by her great-grandfather Conrad Hilton, is filthy rich. And she takes every opportunity on her new show to let us know it.

Not that I have anything against the rich, mind you, but Paris, her sister Nicky and mother Kathy live a life that might as well be on another planet.

For the most part, “Paris In Love” is only partly about Paris’ relationship with this Carter guy. The rest of the show is a series of scenes in which Paris talks about and/or receives an array of merchandise, including the aforementioned dresses but all kinds of other things as well.

Throughout the show, she is seen with her sister and mother talking and drooling over a new rack of clothes or a pair of idiotic bunny slippers that Kathy implies proudly just might be the most expensive bunny-shaped footwear on the planet Earth.

In the final analysis, “Paris In Love” is one of those shows that really makes a TV columnist earn his pay. In other words, I watched this show so you don’t have to. You can thank me later.

“Paris In Love” starts streaming on Thursday (November 11) on Peacock.