ViacomCBS Puts On The Dog With Family-Friendly 'Clifford' 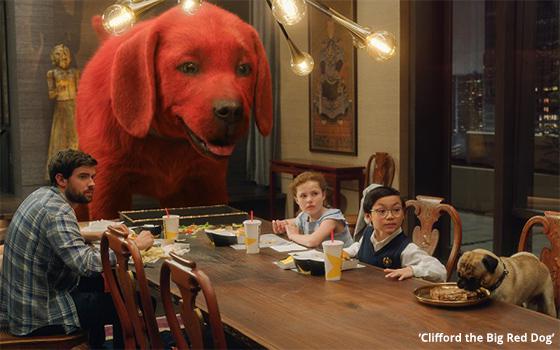 On an evening of casual grazing with our remote control earlier this month we came across a lengthy special on Nickelodeon that turned out to be a long-form promotion for the then-upcoming movie “Clifford The Big Red Dog.”

The message was that this “Clifford” movie was just about the most dog-gone cutest thing you will likely see this year. And all I can say is, Message received.

This movie, which combines CGI animation (the giant dog) and live-action (the family for whom he is an oversized, slobbering, lovable pet) is derived from an old kids’ show from 20 years ago.

Produced by Scholastic for PBS, the original, fully animated “Clifford The Big Red Dog” is apparently well-remembered by the generation that was growing up at the time, although it aired for just two years and a few months (2000-2003).

In that time, there were 66 half-hour episodes, however -- which was more than enough for the show to take hold in the minds of children who watched it then.

Today, 20 years later, they are young adults and this new movie is for them and their young families.

But based on the preview material glimpsed earlier this month, anyone can be charmed by this new “Clifford.” I dare you to dislike it. Or to put a Nickelodeon spin on it, I double dare you.

If you do, and you are bold enough to tell anyone, then it would be like coming out against puppies -- something that is ill-advised.

ViacomCBS is claiming great success with this new “Clifford” (pictured above: a scene from the movie).

The company is so excited about this movie that it issued two separate news releases two days apart that ballyhooed its performance both in theaters and on the company’s streaming service Paramount+. The movie debuted on both on the same day, November 10.

“ ‘Clifford The Big Red Dog’ has wagged his way into the hearts and watchlists of Paramount+ subscribers,” said Tanya Giles, chief programming officer for ViacomCBS Streaming, in the first of these news releases on November 15.

The release claimed a “record-breaking streaming debut,” but provided no details of that. It did say, however, that the movie earned $22.2 million in its first weekend in U.S. theaters.

Two days later on November 17 came the second news release that contained a bit more detail, with ViacomCBS crediting “Clifford The Big Red Dog” for driving new subscriptions -- the most Paramount+ has ever obtained in a single week, 1 million.

This news release also gave credit to its new gruesome prison drama “Mayor of Kingstown,” which premiered this past Sunday, for playing a part in the subscriber increase.

But these two offerings could not be more different.

As some readers of this TV Blog are aware, “Mayor of Kingstown” came in for a big thumbs-down in a review here last week for its cynicism, violence and prolific use of the f-word in practically every sentence.

“Clifford,” on the other hand, is made for the whole family. And since this kind of content is relatively sparse on our TV platforms, it is most welcome.

“The film’s incredible performance on Paramount+ speaks to the power of entertainment for families to enjoy together, and we look forward to continuing to bring our subscribers more exclusive family-friendly offerings,” said Tanya Giles in the first news release.

This charming and insightful show -- produced by Warner Bros. Animation and premiering December 1 -- emerges as one of the most original shows of any kind that I have seen all year (I previewed it this week).

I will have more on the amazing “Beebo” in a TV Blog to come, but if “Clifford” and “Beebo” are representative of the kind of family content Tanya Giles references above, then I predict a rosy future for family programming at ViacomCBS.