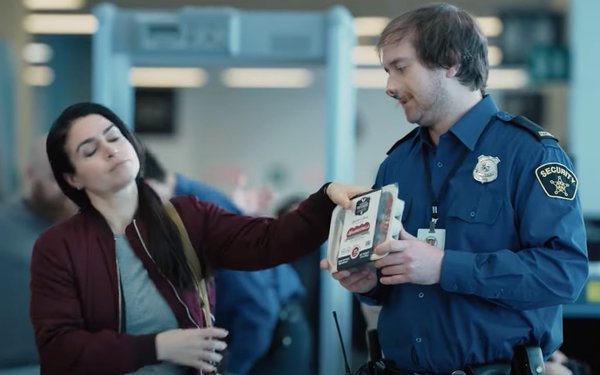 The Very Good Food Co. thinks so—at a time when major plant-based foods producers like Maple Leaf Foods Inc. and Tyson Foods Inc. are expressing mixed sentiments about their positions in the sector.

In this 60-second spot, an agent adorned with what appears to be a miniature pig snout curiously sniffs the air at a border terminal where a sign reads “IF YOU SMELL SOMETHING, SAY SOMETHING.”

He senses “something meaty” and alerts associates to a woman waiting in line. She is led to a room and interrogated about her stash of meatballs.

Things finally go her way when the snout-nosed agent sniffs the meatballs, determines they contain plant substances, and apologizes to the traveler.

“We needed a creative device that would help tell consumers that they can have both in our products. We also wanted to appeal to a broadening flexitarian audience where taste is a major barrier to trial.”

During a Q4 earnings call with financial analysts on Nov. 4, Maple Leaf CEO Michael McCain said the company’s top two “material topics” for discussion were the aftermath of COVID and a “rapid deceleration in the category growth rates of plant-based protein” over the past six months.

“Of course, our performance has suffered in the middle of this, but the more concerning set of facts are rooted in category performance, which is basically flat-lined.”

As a result, Maple Leaf is going “right back to square one with the consumer to fully understand what has changed—if anything—and why. It's going to be this diagnostic, this analytical rigor that will inform our investment choices going forward—because it's important for us to match the investment rate with the investment thesis.”

Maple Leaf COO Curtis Frank said the company expects to have gathered relevant insights “over the next two to three months.”

“In terms of our alternative proteins, if you think of the Raised and Rooted brand of protein, we launched those, we continue to invest in those, and we have seen growth in those categories,” said King as reported by WATT Poultry.

“We’re still in the game. We’re growing, and part of that is growth outside of the United States.”