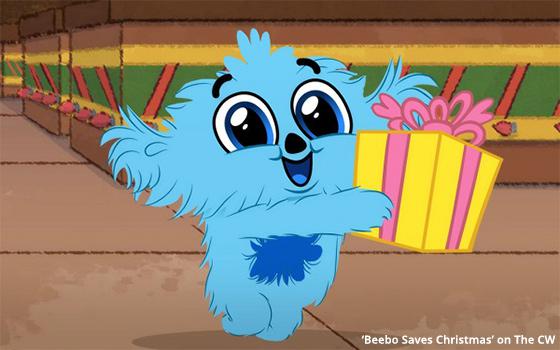 A new animated Christmas special for children coming to The CW this week deserves to join the pantheon of holiday greats.

These would include such seasonal classics as “A Charlie Brown Christmas” (now unfortunately behind an Apple TV+ subscription paywall), “How the Grinch Stole Christmas,” “Frosty the Snowman,” “Rudolph the Red-Nosed Reindeer” and probably a few others.

But in TV time, those great shows are ancient. Here, though, we have a freshly minted new classic featuring a furry blue creature with an unshakably sunny demeanor who swoops in to save Christmas.

His name is Beebo (pictured above) and he is the titular star of this creative new special titled “Beebo Saves Christmas,” produced by Warner Bros. Animation.

The cute-as-can-be Beebo character actually springs from the “D.C.’s Legends of Tomorrow” series also seen on The CW.

In “Beebo Saves Christmas,” the unsinkable Beebo takes on his Christmas-saving mission after he begins to suspect that Santa’s North Pole workshop has been taken over by corporate interests who have -- can you believe it? -- fired Santa and his elves and put his reindeer out to pasture.

And they have replaced Santa’s workshop with a factory powered by a super-robot who tirelessly manufactures all the toys and gifts that will go to the world’s boys and girls this Christmas season.

And who is the corporate mastermind who seeks to automate Christmas? He is an ambitious elf named Sprinkles.

This is the kind of detail I loved about this show when I previewed it recently -- that the writers of this show gave this cold, ruthless disruptor of a traditional business model the unlikely and incongruous name of Sprinkles.

Ben Diskin is the voice of Beebo, Chris Kattan is the voice of Sprinkles, and Ernie Hudson is Santa Claus. The show’s other principal characters are named Tweebo, Turbo and Fleabo. Victor Garber is the narrator.

Beebo’s first inkling that all is not well in Santa Land is a letter he receives in response to his annual letter to Santa containing best wishes and gift requests.

This letter will be familiar to every viewer (adults more than children) who has ever been on the receiving end of communications from some of today’s companies that are so impersonal and mass-produced that they are actually insulting.

The letter -- a response on “North Pole Headquarters” letterhead from a heartless corporation to a child’s letter to Santa -- goes like this:

This letter is to confirm your Christmas wish has been received. Thank you for your interest in the holidays.

Even though he is a child character, Beebo possesses the instincts to sense that something has gone terribly wrong.

So, he gathers up his friends and travels to the North Pole to learn what has happened to the Christmas he loves. There, he learns the truth after encountering Santa now working as a barista -- and not a very good one -- in a local “Snowbucks” coffeeshop.

With its colorful characters talking (and occasionally singing) in childlike voices, this one-hour show is 100% appropriate for children.

But adults will enjoy it too because it emerges as a total, no-holds-barred takedown of contemporary corporate culture, current trends in social media and the ever-popular runaway consumerism of the Christmas/holiday season.

On the subject of corporations and the way they mire their customers in the website weeds, one scene in the show has the friends attempting to search for Santa Claus’s name in the new North Pole corporation’s automated directory that they access through an artificial-intelligence portal.

Of course, the system cannot find Santa Claus anywhere, even though he is technically the “founder” of this company. A situation in which a search on a company’s own website leads nowhere? How many times does this happen every day in the real world?

Needless to say at this point, but I loved “Beebo Saves Christmas.” Beebo’s unbridled optimism (which will remind some of SpongeBob’s) is infectious. His arrival on The CW here at the onset of the holiday season is more than welcome.

“Beebo Saves Christmas” airs on Wednesday (December 1) at 8 p.m. Eastern on The CW.