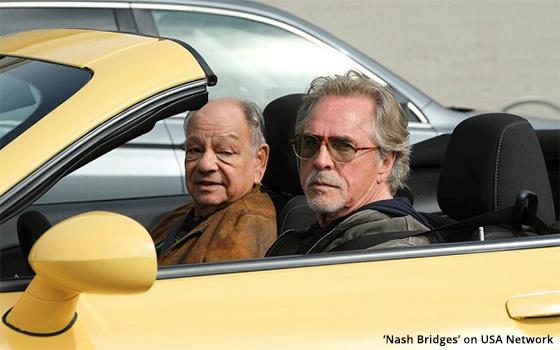 Whether or not you give thanks this Thanksgiving weekend for this new “Nash Bridges” TV movie depends on how well you loved the old one.

While the TV Blog takes pride in its ability to pick up whatever buzz is going around the TV business, a groundswell of interest in a “Nash Bridges” comeback was not something that has ever come up on the proverbial radar.

And yet here it is, a new TV movie, also titled simply “Nash Bridges,” coming Saturday night on USA Network (not the show’s original home on CBS from 1996 to 2001).

As before, this new made-for-TV movie stars Don Johnson, now 71, as the titular, swashbuckling San Francisco supercop, and Cheech Marin, 75 (seen with Johnson in the photo above), as his partner and sidekick, Joe Dominguez.

It is not entirely clear why these oldsters are still working big cases for the SFPD in a souped-up sports car. In the real world, most cops, if not all of them, would be long retired by their age.

We do learn early in the movie that Rodriguez is in fact fully retired and now the proprietor of a San Francisco pot dispensary.

This is a nice touch, given Marin’s past history as a pioneer in pot-based comedy years ago with long-time partner Tommy Chong (who does not turn up in a guest role or cameo appearance, unfortunately).

In this “Nash Bridges” movie, Rodriguez returns not as a full-fledged, unretired member of the force, but as a “consultant” who has been brought on at the insistence of Nash Bridges, a man to whom no one has ever been able to say the word no.

As for Johnson’s Nash character, it is not quite clear at the outset if he is off the force or on it. I watched the movie just a week ago and seem to remember that he was first still on the force, but then was suspended for a time.

If memory serves, he was then asked back because the SFPD simply could not solve a big murder case without him.

This is farfetched on its face, as if this entire big-city police department was so stymied that it had to recall a former detective in his 70s to straighten the whole thing out.

But if a farfetched storyline presents an obstacle to you, then I suggest you pass on this TV movie. At one point while watching it, I wrote in my notes, “[This is] possibly the most unrealistic cop show ever.”

That is, of course, hyperbolic note-taking, but it does represent the degree to which I was not buying most of the plot of this show.

Now, this is not unexpected when watching a show such as this one, whose style is a throwback to the era in which “Nash Bridges” was a brand-name title. Back then, the kind of air of unreality that pervades this TV movie was fully accepted by most.

Still, it is hard to believe a number of plot developments in this new TV movie, starting with (and mentioned above) the advanced age of these two detective partners who are still doing police work.

Another is the flirtatious play this 71-year-old man makes for a police psychiatrist played by Bonnie Somerville, who is 47. The good news is, we never do learn if she takes him up on his inappropriate advances.

As for the “big case” that is the centerpiece of the show, it involves a series of murders that seem to be the work of a wily serial killer but actually turns out to be something much different.

These victims appear to be losers in an underground betting sport in which two combatants with giant swords and axes fight to the death while men and women in tuxedos and fancy gowns place their bets and then cheer on their favorite while watching this death match on a big TV screen in some sort of illegal casino,

This deadly betting game storyline is grotesque and defies belief, even as a plotline on a TV show.

In fairness, one thing worth saying here is that for a 71-year-old, Don Johnson seems to have taken good care of himself, which is to say, he and his Nash character seem like very active seniors.

Maybe the younger police psychiatrist will think so too.