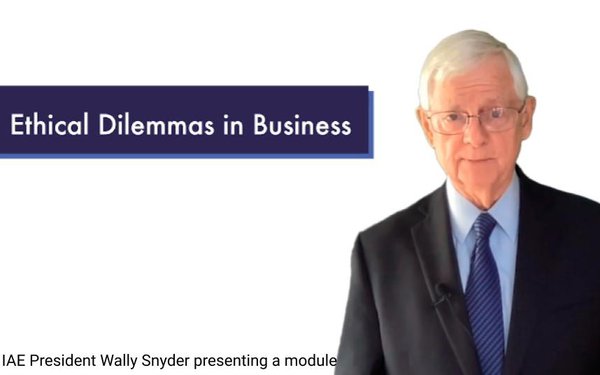 Doctors, lawyers, accountants, even plumbers and electricians all have professional certification programs, and now the advertising industry has one too. The Institute for Advertising Ethics (IAE) has quietly rolled out the first official version of a training and testing program to certify industry pros as ethical advertising executives.

The program, which is open to anyone involved in the ad profession -- clients, agencies, as well as their supply chain of data, technology and media vendors -- comes at a time when the subject of ethics is rising across an array of industry issues, from the use of data, the equitable allocation of advertising budgets, and even the transparency of business practices between companies and individuals.

The program -- which was created with input from a diverse advisory group, as well as some leading academic and legal minds -- is comprised of modules addressing key personal and business issues for ad professionals, and serve as both a source of education, as well as certification.

The process is self-administered, conducted online, and done at the convenience of each applicant. The modules cover both business and personal cases for advertising ethics and legal matters, as well as the components necessary for building an ethical culture within your organization.

Each module is followed by a simple testing procedure, and participants who get 70% or more of the answers right, receive certification. The modules and tests can be repeated until the applicant qualifies, and the IAE says the curriculum will be updated over time as new and emerging areas of advertising ethics arise, such as new laws, new business practices, and especially new technologies.

Why begin with ethics?

“The answer is that there are plenty of technical certifications out there for advancing the techniques, tools and methods of advertising practitioners,” explains IAE COO Andrew Susman, noting: “However, advertising is the virtually the only profession without an independent ethical standards or ethical certification - no reference point.”

As good as the ad industry is getting with its technical, and scientific prowess in using data, technology and the art of persuasion, Susman cites other industries where “science without ethics” leads to unintended consequences: the financial industry’s sub-prime crisis, which led to the Great Recession in 2007-2008.

The program comes at a time when many organizations are developing their own ad hoc or even sophisticated frameworks for making better ethical decisions in their companies in order to avoid potential risks and liabilities for agencies and advertisers alike, and to ensure that they are working with suppliers who also adhere to ethical standards that when breached, can also cause significant financial liabilities, such as fines for violating consumer data privacy regulations.

Early this year, GroupM created a new tool -- an “ethics compass” -- for its agency teams, clients and suppliers to use when going through the process of assessing what consumer data is ethical to use, and how to ethically use it.

Most big agency holding companies have or are developing similar frameworks for dealing with a wide variety of ethical issues ranging from diversity and inclusion to equitably budgeting advertising for minority media to the use of inclusion and/or exclusion models for powering human and/or programmatic advertising decisions.

And both clients and agencies have also been updating business practices to ensure full transparency in the aftermath of a kickbacks and rebates crisis exposed by the Association of National Advertisers several years ago.

Those developments helped inspire the launch of the IAE, and ultimately, the certification program.

“We actually ended up with a similar framework,” says Ben Downing, global managing director of ethical media & strategic partnerships at Havas Media, who recently completed the IAE certification program and says his organization is considering incorporating it into its internal “Havas University” training and onboarding program for new employees to become professionally certified by an independent body.

Downing says that when Havas Media began developing its own framework, it studied much of the classic academic literature on ethics, especially business ethics, but found that when it came to media, most of it was focused on journalism and production.

“It didn’t have much to do with planning and buying media, so we developed our own really simple framework,” he explained, noting that it is based on two core principles -- “do no harm” and “try to do good” -- and that it is an evolutionary process designed to create “better experiences” for the consumers Havas advertises to.

While “do no harm” principles may seem basic, trying to do good requires more “muscle,” says Downing, noting that it goes well beyond ethical decision-making and requires explicit application, usually at the ad budgeting level.

“Take the social equity marketplace,” he says, “everyone is doing that and we all need to do more, but we’re trying to go beyond hat to correct for the historic underinvestment in minority media.”

He cites a partnership Havas Media launched with TikTok earlier this year to help fund and underwrite and provide services for minority-owned media and ad tech startups.

Another explicit example of trying to do good involves rethinking some of the unintended consequences of advertising technology and data, citing an indirect environmental impact of “inefficient” programmatic media buys.

Downing says organizations like Havas Media will continue developing internal ethics frameworks, polices and applications, while working with clients and suppliers to operationalize them, but he also believes there is a need for independent industry standards like the ones developed by the IAE’s certification process.