Online Spending Was Flat On Black Friday, But Should Be Strong On Cyber Monday, Adobe Reports 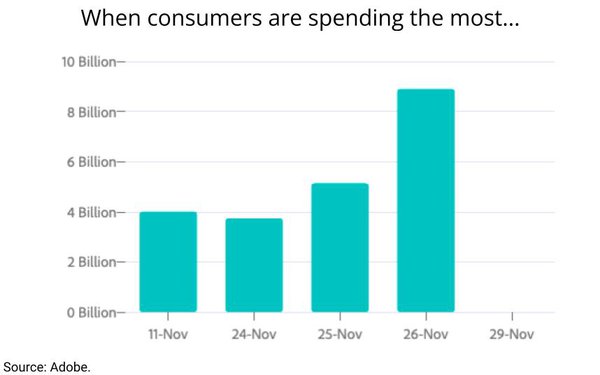 Online spending was flat on Black Friday, hitting $8.9 billion, Adobe reports. This is the at lower end of Adobe’s predicted range and less than the $9 billion reported for the day in 2020.

Pandya adds: “Shoppers are being strategic in their gift shopping, buying much earlier in the season and being flexible about when they shop to make sure they get the best deals.”

What’s more, consumers have spent $89.9 billion so far throughout this holiday season and are on track to hit $207 billion, Adobe says, confirming its original estimate.

The consumer spend has surpassed $2 billion every day so far, and it has exceeded $3 billion for 19 days. In contrast, there had been only five $3 billion days at this point in 2020 and twenty-two $2 billion days.

Adobe defines the holiday shopping season as the period between November 1 and December 31.