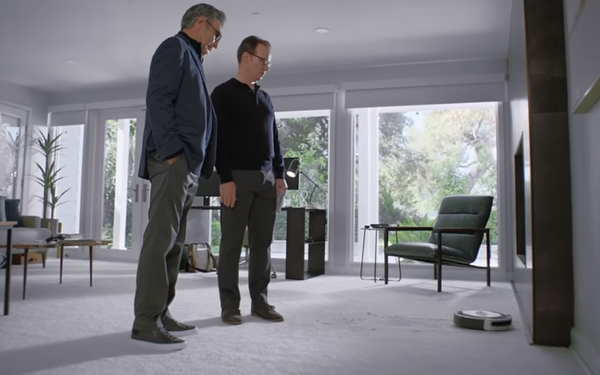 Eugene Levy is everywhere this year and self-guided vacuums are as well, so why not combine the two?

Nice, a Hoboken, N.J.-based AI-powered self-service and agent-assisted CX software firm, has enlisted the "Schitt’s Creek" actor to star in new ads for its CXone cloud platform. The work is from McCann.

One ad shows Levy entering the home of a man who just bought a self-guided vacuum. The vacuum only seems to move one way, back and forth.

“You know, artificial intelligence is supposed to be all about self-learning,” Levy says, pointing to the robot vacuum. “But the only thing this is learning is how to ruin a carpet.”

The man then asks, “What’s the opposite of artificial intelligence?” to which Levy answers. “Oh, I think we’re looking at it.”

Levy stresses that CXone is "the only true next-gen CX cloud platform AI that actually gets smarter with every interaction.”

Another ad features Levy in a hardware store that doesn’t sell hammers. When asked how he’d hammer in a nail, the owner bangs an imaginary nail with a screwdriver. That leads Levy to say, “When it comes to customer experience, ‘almost, sort of,’ is not enough. To get the job done right, you need the complete set of tools.”

Levy then says that only CXone has that.

In another ad, Levy is in a car with a man testing his navigation system. The system is vague about directions (“Turn right at the street named after a famous South American revolutionary”) and misunderstands spoken directions -- it misreads “Lazy Bear Spa” as “Crazy Hair Spa.”

Still another ad features Levy overseeing a birthday celebration over videoconferencing. “You can’t put a hodgepodge of devices together and expect a seamless experience,” he says. “You need one digitally fluent platform.”