Skyn Shoots Down Men's Excuses For Not Wearing Condoms 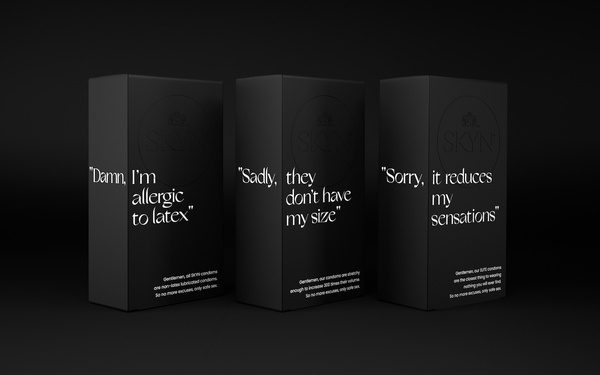 In connection with World AIDS Day (Dec. 1), condom maker Skyn is launching a campaign to raise awareness about the disease and its prevention.

The company discovered that men continue to come up with excuses not to wear a condom, so it decided to address the issue head-on with a campaign from Sid Lee touting the "Inexcusable Excuses" collection.

The message has been adapted to markets including the U.S., Portugal, Italy, Brazil and France. French influencer Camille Aumont-Carnel (@jemenbatsleclito) is pushing the subject to her 700K+ Instagram followers.

For the ad, Skyn redesigned the packs by labeling them with assorted bad excuses made by obstinate men. The box with the excuse "Sadly, they don’t have my size" includes the retort “Gentlemen, our condoms are stretchy enough to increase 300 times their volume. So no more excuses, only safe sex.”

"Damn, I’m allergic to latex" is met with “Gentlemen, all Skyn condoms are non-latex, lubricated condoms. So no more excuses, only safe sex.”

Finally, ”Sorry, it reduces my sensations" gets the response “Gentlemen, our Elite condoms are the closest thing to wearing nothing you will ever find. So no more excuses, only safe sex.”

According to Rise Up To HIV, #WorldAIDSDay began in 1988, as a chance for people worldwide to unite in remembering those lost to the virus. It is also a day for raising awareness about HIV/AIDS.

Durex and Trojan, other well-known condom brands,  do not appear to be engaging in any promotions around the day, per their social media pages. Both brands have created marketing campaigns tied to World AIDS Day in previous years, including Durex’s partnership with the AIDS organization (RED) in 2018, and Trojan Brand’s donation of 1.2 million condoms to the National Coalition of STD Directors in 2016.