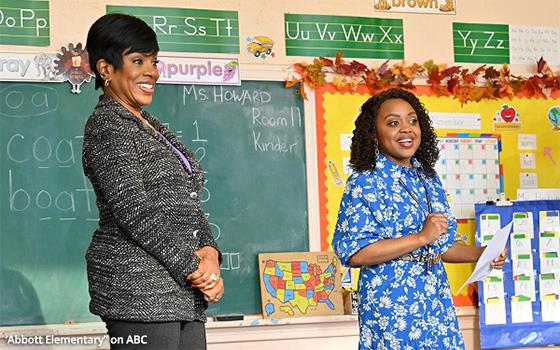 A small child is positioned as being no more controllable than an un-housebroken dog in a new ABC sitcom premiering Tuesday night.

Reducing this human child to the level of a dog was probably not the intention of the writers and producers of this new show, but nevertheless this is how it came out anyway.

The show is a workplace comedy called “Abbott Elementary.” Set in a fictional Philadelphia grammar school, the show is about one earnest new teacher’s efforts to overcome various challenges, and in the process, make a difference in the lives of her small students.

Not surprisingly, the obstacles include government indifference, inadequate funding, an incompetent principal and others.

These issues, along with the eccentricities and idiosyncrasies of this teacher’s colleagues, are dealt with comedically, although the comedy is so mild (to put it mildly) that it was difficult to detect in the pilot episode ABC provided for preview.

The show is credited almost entirely to one creator/producer -- comedian Quinta Brunson, 31 (above photo, right) -- who also stars in the show as the central, “earnest teacher” character.

According to the ABC publicity materials, the series is inspired by the experiences of Brunson’s mother as a teacher in the Philadelphia public schools.

Perhaps her mother’s experience included coming upon a small boy unabashedly relieving himself on the rug in the middle of one of her classrooms. Or the creator-producer merely dreamed this up.

Whatever the case, this happens about two minutes into the premiere episode of “Abbott Elementary.” The explanation for this casual urination is that basically, he had to go.

The only consequence of this act was that the rug had to be sent out for cleaning. Later, it dawned on me: The makers of this show have made a child character who is on par with an untrained puppy, and they probably didn’t even realize it.

Maybe they became distracted by their apparent need to include this urination scenario in the show in the first place since everybody does it (meaning toilet comedy in sitcoms, not children peeing on rugs).

Not to be outdone, about 10 minutes later in Episode 1 of “Abbott Elementary,” another kid wets his pants and then a toilet explodes in a teacher’s face and soaks his clothes with heaven-knows-what.

Does this sitcom need professional help? If so, they can start by calling a plumber.