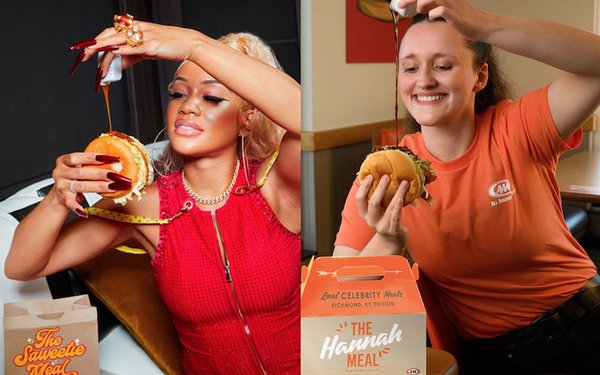 In a worker-recruitment campaign that franchisees can tailor to local labor-market conditions, A&W is poking fun at restaurant competitors whose advertising features celebrity endorsers.

Titled “Anti-Celeb Meals,” the campaign juxtaposes images of celebrities with those of employees enjoying their favorite A&W meals.

In one example, created in conjunction with the Coomer agency, Kentucky A&W worker Hannah is shown enjoying The Hannah Meal, alongside an image of rap star Saweetie garnishing The Saweetie Meal from McDonald’s.

For A&W—with three company-owned and 520 franchised locations in 41 states—it’s a pivot from advertising that typically focuses on menu offerings to campaign creative elements that can be customized for each restaurant.

“The majority of our marketing is done locally. We don’t do any national price points, so our franchise partners are used to customizing materials on their own,” A&W senior director of marketing Liz Bazner tells Marketing Daily. "This is the first time we’ve done it for something that isn’t product-focused.”

With the exception of campaign videos on social platforms like Facebook, most of the campaign’s creative assets consist of on-premises signage and uniform T-shirts that can be customized to each store location and its employees.

“The idea is that our restaurants can actually include information about their own members,” says Bazner.

Assets like window posters can be tailored to the specifics of local job markets.

“What we’ve suggested for our franchisees is to take a look at their area and see what other hiring messaging their competitors are using. We’re seeing in some markets restaurants are being very forward with how much the starting pay is.”

There is no time limit for the campaign.

“We just rolled it out last week, so it’s still very early days. If the labor crunch continues, I’m sure that we’ll be working on other iterations to keep the message fresh,” adds Bazner

Founded in 1919, A&Wcalls itself the oldest U.S. restaurant franchise. In 2011, the chain’s franchise association purchased the business from Yum! Brands Inc., which had acquired A&W in 2002.

According to the U.S. Bureau of Labor Statistics, the foodservice industry added 11,000 jobs in November but remains 750,000 jobs below the total in March of 2020.