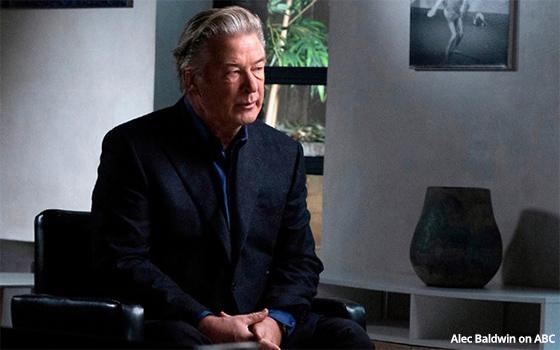 Prime-time interviews with newsmakers in the headlines are not what they used to be.

That is the possible lesson learned from last week’s prime-time interview with Alec Baldwin conducted by George Stephanopoulos.

A production of ABC News and Stephanopoulos’ production company, the interview aired last Thursday from 8 p.m. to 9 p.m. Eastern.

The interview was the first to be granted by Baldwin since the tragedy on October 21 in New Mexico, on the set of the movie “Rust,” in which he fatally shot -- presumably by accident -- cinematographer Halnya Hutchins with a prop gun. Director Joel Souza was wounded, but not fatally.

The interview was an opportunity for Baldwin, who hosts “Match Game” on ABC, to give his side of the story of the incident, which has been understandably painful for him.

In the interview, he tried to explain in plain English how the handling of firearms is supposed to work on a movie set. He also described what movie sets are like generally.

He said that despite the traditional safeguards, a live round instead of a blank one was in the pistol he was handling for a scene that was being filmed. How this bullet came to be there remains a mystery to him and to investigators.

Baldwin did the interview because since the tragedy he has been vilified in that great court of public opinion, social media, and in some regular media as well.

The view from here is that he did a pretty good job of laying out the facts about what happened. He was believable and credible, except perhaps for the moments in which he suddenly sobbed.

Since he is an accomplished actor who likely possesses the skill of crying “on cue,” as it were, a skeptic might have wondered if that was what he doing right then. Or, maybe he was truly overcome.

For a couple of days, the interview made news. Some coverage preceded it on Wednesday as ABC News released a clip or two for publicity in advance of the Thursday airdate.

The same sorts of stories ran on TV news shows and on-line news sites during the day on Thursday leading up to the big show.

Then, Friday’s day-after coverage provided new details from the hour-long interview, plus post-mortems and commentary, a good deal of it negative and nitpicky.

And then, by the weekend, crickets. And that’s the thing: One of the phenomena about these kinds of prime-time interviews -- “gets” they used to be called -- is that they seem to have no “sticking” (i.e., staying) power here in the present TV era.

Where the ABC Baldwin interview is concerned, the ratings tell the story. Interest in the interview turned out to be low, when ABC had every reason to believe it would cause a sensation and emerge as the evening’s most-watched show.

Instead, the opposite occurred. The interview drew an average total audience of 4.13 million and came in fourth behind the shows on the other three networks in the 8-9 p.m. hour on Thursday, according to various reports.

Perhaps more importantly, however, the interview did not seem to generate whatever it was that Baldwin and (presumably) his p.r. crisis team had hoped for.

Probably they sought some sort of palpable vindication for Baldwin. Or to put it in presidential terms, a boost in his popularity rating.

But here it is a week later and few people or media outlets, if any, are still talking about the Baldwin interview. And they have not been talking about it for days.

A similar phenomenon emerged from the last high-profile interview of this type on TV -- the conversation Oprah Winfrey had last March with Prince Harry and wife Meghan Markle that was their attempt at burnishing their public image.

At least that one scored highly in the ratings -- a total audience of 17.1 million -- one of the highest viewership tallies for any single show all year.

However, within about two weeks, the world seemed to forget about Harry and Meghan and their tales of woe at the hands of the British royal family. Today, so many months later, who is even thinking about them? The answer is: Nobody.