Space Is Bigger Than He Thought: 20 Years Later, Dell's Dude Is Back 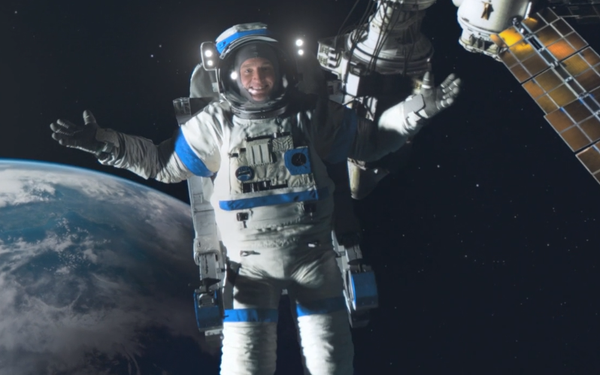 Some 20 years ago, Ben Curtis played the Dell Dude in ads for the tech firm. Now, he’s back to tell the world of Dell’s migration from PCs to technology for recycling and even tech for the space sector.

The ads, via VMLY&R, feature the now-41-year-old Curtis playing an older dude who is still impressed by the company. In a teaser ad, Curtis merely says “dude,” a few different times.

In another ad, Curtis notes that a lot can happen in 20 years. For instance, “Dell got really into recycling. They’ll take everything from desktops to batteries,” he continues. Curtis then explains that all you need to do is print out a label and use it to send your stuff in.

“Because all great things can make a comeback,” he says.

Another ad shows Curtis (and Dell) contributing to race car McLaren’s technology. That ad features Curtis explaining how Dell works with the company and (while Curtis is driving a McLaren), he says, “Dude, I gotta get one of these.”

And there’s an ad talking about Dell’s contribution to space technology. The ad features Curtis, in space, telling the camera, “Dude, a lot can change in 20 years,” including Dell's powering space exploration. “Space is bigger than I thought,” he concludes.

For those who remember, around 2000, Curtis starred in ads for Dell themed, “Dude, you’re getting a Dell.” The ads were successful and made Curtis an onscreen presence, starring in some 26 commercials. In 2003, Curtis was accused of buying a bag of marijuana and Dell terminated the contract.