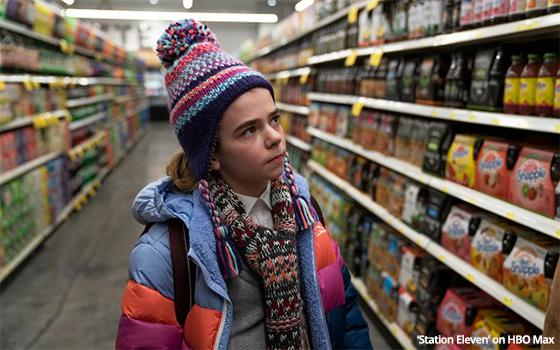 Anyone who has had any experience of the December cold of Chicago will be chilled by the realistic way it is rendered in this new drama called “Station Eleven” premiering on HBO Max this week.

But the depiction of the Windy City’s extreme winter cold is only a partial cause of this show’s chilling effects.

Because in addition to the cold weather settling over the city in the weeks before Christmas, a deadly flu variant is poised to overrun the city.

The arrival of this show this week is nothing if not timely. Here in the real world, these are also the days before Christmas.

Plus, this show’s pandemic theme is certainly relevant in the context of the world today, although the galloping illness in “Station Eleven” is more deadly -- so far -- than COVID-19 and its variants.

The premiere episode deals primarily with a young man (played by Himesh Patel) and a little girl (Matilda Lawler) who are thrown together just before the pandemic explodes.

Lawler -- pictured above in a supermarket where she and her protector, Jeevan, are stocking up on supplies -- is a revelation. She gives the best performance from a juvenile to come along in a very long time.

Without giving anything away, Jeevan receives a warning of the coming catastrophe early in Episode One in a phone call to his sister, who is an emergency-room physician.

At the time of the phone call, Jeevan is riding in one of Chicago’s El cars. After absorbing the news, he suddenly becomes watchful and afraid of his fellow passengers as he wonders if any of them are sick but do not know it yet.

It is another uncanny parallel with real life because many of us experienced the same feelings of paranoia and bewilderment in city transit systems during the first outbreaks of COVID-19.

Suffice it to say, but “Station Eleven” is a very high-quality series. It is sensational.

The fact that this review comes just one day after another four-star review for the new AMC+ Australian vampire series, “Firebite,” represents a very rare and possibly unprecedented confluence of great shows on two consecutive days for the TV Blog.

I wonder what the rest of December will bring?