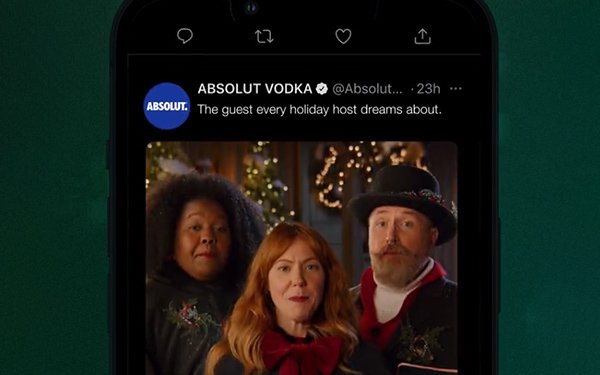 Absolut vodka is trying to insinuate itself into the holiday caroling tradition with new versions of “Deck the Halls,” sung with different lyrics.

The lyrics are tweets that people on Twitter have posted. When one tweeted, “Some people bring wine to dinner parties. I bring vodka,” Absolut responded with this video, which features carolers singing the tweet.

There are at least five versions of the carolers, including a song using “Wait—who doesn’t like Absolut??!! Seriously!!?? Fainting emoji. Shocked emoji” and “Sleeping under my Christmas tree. Because I’m a gift. I’m a gift.”

The spots, from VMLY&R, are all under 30 seconds and celebrate the fact that an espresso martini is “the unofficial drink for that weird week between the holidays” and ask “How is it only Tuesday?”

The effort comes after Absolut sales took a hit in 2020, falling from 11.2 million 9-liter cases in 2019 to 9.6 million cases in 2020, per Statista. That dip also came after the brand cut back on ads in the U.S. by about $3 million compared with the previous year.