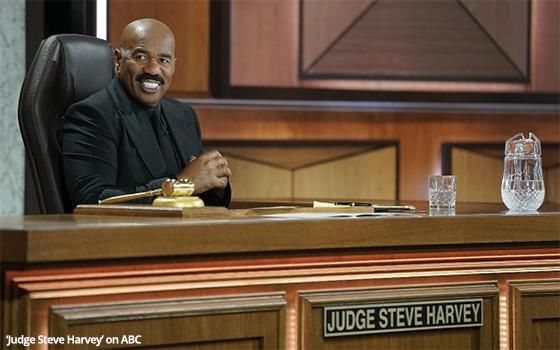 A staple of daytime TV is about to barge into prime time, raising questions about the way daytime seems to be gradually encroaching on prime time.

The show doing the barging is “Judge Steve Harvey,” premiering January 4 on ABC.

On the show, the eponymous, ubiquitous comedian and all-around TV personality will take a seat at a judge’s bench (pictured above) to hear stories of “real-life people with real-life conflicts [who] will present their cases in his courtroom … family disputes, unpaid bets, sour friendships and everything in between,” according to ABC.

Unlike most of the court shows on daytime TV (also called “judge” or “judging” shows), each episode of “Judge Steve Harvey” will be an entire hour, which might prove to be a challenge for the average person’s attention span.

On the other hand, while most of the other judge shows are a half-hour in length, some court shows currently on the air such as “Judge Judy” and “Divorce Court” (to name two of them) air back-to-back half-hour episodes here in New York.

An exception to the half-hour “rule” is “The People’s Court” with Judge Marilyn Milian. Like Steve Harvey’s judge show, this show is also an hour long.

For decades, syndicated, five-day-a-week court shows have been a staple of daytime TV. There have been a ton of them.

In fact, there seem to be fewer of them around these days, at least in New York, according to the daytime schedules of the six English-language commercial broadcast stations here and two Spanish stations.

All of the current shows (and the majority, if not all, of the previous ones) are presided over by personalities who have actually been judges or have had some experience in a legal career -- even Jerry Springer. He has a law degree from Northwestern.

However, the fact that Steve Harvey is not a judge does not necessarily present an obstacle to the success of his new judging show, to which he will likely bring his winning TV personality, just as he does everywhere else such as “Family Feud,” for example.

But the fact that a TV judge show is due to take up residence in a prominent evening timeslot -- 8 p.m. to 9 p.m. Eastern on Tuesdays -- on one of our major networks represents a milestone of sorts. It is the first time that a TV judging show has come to prime time.

Certainly, no one will ever confuse prime-time network television with high art. But at the same time, the daytime judging shows are a particularly low-rent form of television that would not seem especially suited for prime-time, which, after all, is still considered by many to be a special “showcase” daypart for television, even if it does not always live up to that image.

This is not to judge the judge shows and those who enjoy them too harshly. The court shows serve a purpose in the television landscape, and I watch them occasionally.

Because they are designed for daytime, where audiences are smaller, they are cheaper to make than many other kinds of TV shows (unless you have to pay an astronomical salary to someone like Judy Sheindlin).

For most of us who observe and watch television, the court shows are more or less on par with “Maury” or the old “Jerry Springer Show.”

Former daytime game shows have already made the migration from daytime to nighttime, particularly on ABC. The arrival of “Judge Steve Harvey” is a sign that that migration is continuing.