Rapper Young Thug Is A Mellow Fellow In 'Chillin Island' 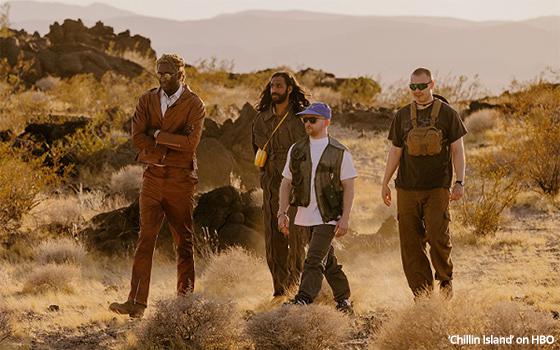 It took almost the entire year for the most unusual show of 2021 to arrive.

Categorizing it is impossible. Is it a reality show? Sort of. Scripted show? Probably not. Competition-survival show? Definitely not. Nature travelogue? Another “sort of.”

Aside from the customary apostrophe in “Chillin’ ” missing from the title, this show is full of surprises, which is why it is so challenging to pin down.

For openers, it does not take place on an island at all, but in a desert. In addition, no one is tasked to outwit anybody else, in the manner of “Survivor” and other such shows.

The “Chillin Island” location looks like a desert in the American southwest, but this is not specified, possibly because to do so would amount to an admission that this is not an island.

Not that that matters much. Suffice it to say that the location is remote enough to feel like an island that is far from civilization.

This impression lasts for the first episode’s first few minutes -- right up until the moment a helicopter arrives and later, a freight train is seen in the distance.

The purpose of the helicopter is to deliver rapper Young Thug (above photo left) to the proceedings -- one of the surprises alluded to earlier. His presence in the desert, clad in a tan leather suit, is incongruous, to say the least.

There, Young Thug (who is not so young at 30 years-old) joins three other “rap personalities” (as they are described in the HBO publicity material) who are already there -- Alec “Despot” Reinstein, Ashok “Dap” Kondabolu and Aleksey “Lakutis” Weintraub.

If this show cannot be categorized, it can at least be described. In the half-hour premiere episode, this four-person get together in a remote desert is supposed to be some sort of retreat where they can get away from the hustle and bustle of their usual surroundings.

Part of that is true. They do indeed have experiences that are far different from the ones they usually have, including spending a night camping in the desert, eating terrible food and meeting a man who lives in a van out there that is full of snakes he has collected.

Through it all, the four engage in conversations and repartee that can only be described as very male in nature. Translation: Much of it is earthy and crude, but since it is not unexpected, it is not necessarily an obstacle to enjoying the show.

If those episodes are as illuminating as the first one, then prepare to learn a lot about the rapper guests.

In the premiere, Young Thug reveals himself to be a wildlife enthusiast who -- Discovery Channel publicists and marketers take note -- regularly watches Discovery and its wildlife documentaries.

In “Chillin Island,” he expounds on cheetahs and snakes, makes a prediction about the future of rap music 40 years from now, and muses about the universe. “In 40 years,” he says, “rap music will be like Tesla -- something we never imagined,”

Gazing up at the nighttime stars, he asks his fellow campers, “Do you guys know there are more stars than grains of sand?”

At some point while watching this show, I wrote in my notes that “Chillin Island” might be the mellowest show I have seen this year, and possibly any year.

Oh, and here is another incongruous surprise. The whole show is narrated by the unseen Steven Wright, the stand-up comedian known for his deadpan voice.

Why did they choose his voice over, presumably, so many others? Beats me. But the monotone quality of Wright’s voice only adds to this show’s air of mystery and surprise.

Between Wright’s voice and the show’s awe-inspiring natural setting, it won’t be long before you’ll be chillin’ too.