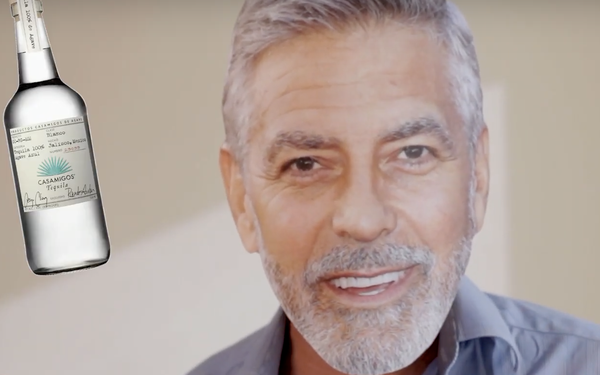 John Chappell, founder and CEO of Paquí Tequila, says he’s had it with celebrities like George Clooney, Kendall Jenner and Dwayne Johnson launching rival tequila brands. “Stick to your day jobs!” he declares in a press release.

A new Paqui video mocks those three celebs, with Chappell's face covered by look-alike masks. The CEO says the following lines for each star:

Jennner: “I’m great at taking selfies and walking the runway, and I love to play dress-up.”

Johnson:: “I can wrestle, make blockbuster movies and lift a lot of weight, and I’m built like a tank.”

Then for each celeb: "But that doesn’t mean I’m qualified to talk about what makes a great tequila.”

Pop Culture PR, which is handling buys on social media, created the :68 video in a deliberately light-hearted way, the agency’s founder/director Darren Shuster told Marketing Daily. “We kept the production level somewhat scrappy and on-the-fly on purpose so that it does not look like we are seriously going after these huge personalities and their brands.”

And yet… Paqui and Pop Culture are also launching a “Celebrity Spokesperson Re-Education Program.”

According to Chappell, tequila celebrities who enroll in this program will receive a “10-brand blind taste test, a lecture on the tequila-making process from Jalisco-based master distillers, a facility tour, recommended readings, and a primer on Aztec culture and traditions to provide a more nuanced understanding of tequila and its history.”

To enroll, celebs are invited to email Shuster, who said that if none sign up on their own, “we are planning on reaching out directly to various celebrities.”

Eventually, though, Shuster noted Paqui plans to open up the program “to the public if they want to get the same ‘tequila’ education that these celebrities can get access to.”

“We want to educate tequila enthusiasts and occasional drinkers alike, and that starts with educating celebrities who represent the category to millions of consumers,” stated Chappell. “It is currently open to celebrities only, at no charge, because we think these Hollywood big shots need our attention immediately.”

Eight-year-old Clooney’s Diageo-owned Casamigos Tequila, which was sold to Diageo for at least $700 million in 2017, hasn’t made any announcements recently.

Another celebrity-owned vodka, one not targeted by Paqui, was also scheduled to be sold soon. But Entertainment Arts Research’s $12 million deal for Chris Noth’s Ambhar brand has been scuttled, reports The New York Post, in light of sexual assault charges against the “Sex and the City” star.