'Cleaning Lady' On Fox Gets Down And Dirty 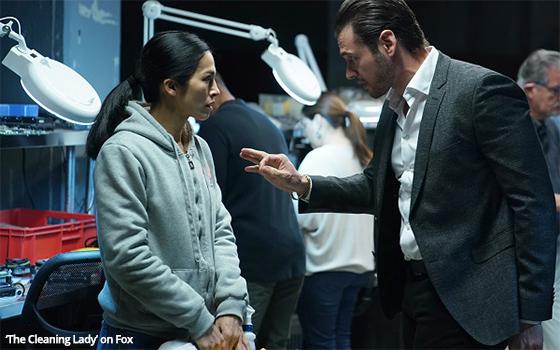 Although its timing makes it the first new network series of the new year, “The Cleaning Lady” is not a show designed to help the rest of us fulfill New Year’s resolutions to declutter, clean or otherwise straighten up our homes in 2022.

While such a show would be a great idea for HGTV, this “Cleaning Lady” is a gritty, scripted crime drama based in Las Vegas about a woman who is hired by an organized crime figure to “clean up” after the various messes that are left in the wake of some of his “business” dealings.

In addition to its promising premise, the lead role of this cleaner-upper is played by a charismatic newcomer (new to me, at least) named Elodie Yung (pictured above) who gives a great performance.

She inhabits her character and makes her real. The character is named Thony, an illegal immigrant who was a doctor in her native Cambodia, who now works in a Las Vegas hotel cleaning up after banquets with other such immigrants.

In the series premiere, Thony is called upon to put her cleaning skills to work for this mobster after she witnesses a killing. Her cleaning skills save her life when he decides to hire her instead of killing her.

And that’s the show. Like other such characters in various TV dramas, Thony is challenged to balance her home life and regular job with this new side occupation that she struggles to keep secret from friends and loved ones.

This is all well and good, but the show suffers from, and is diminished by, its resort to tired TV clichés.

The most intrusive of these is the insertion of sudden spurts of loud thumping rap music usually delivered by a female rapper.

Someone turns on this rap machine every time the show wants to present Thony (sometimes with a friend) as a fierce, independent, confident woman -- itself a cliché these days on television.

Unfortunately, these rap interludes come when Thony is striding through a casino in a minidress and high heels like she’s in one of those Kim Crawford wine commercials.

Or when she’s talking to her mobster boss about her cleaning position in his crew and in the process aiding and abetting his crimes.

Is this how women are supposed to express their power, by engaging in criminal activities? On TV, it would seem so.

The rap music insertions also come much too frequently. They are like the unnecessary exclamation points that hack writers will append to the end of sentences in order to make them more emphatic!

This “Cleaning Lady” is obviously strong, tough, independent and powerful. She needs no fierce musical interludes or any exclamation points to stand on her own.