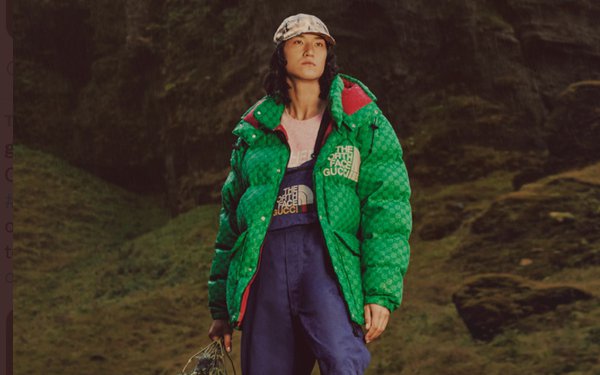 Just in time for a little schussing -- or at least some glamorous grocery runs -- Gucci and The North Face are rolling out their latest collaborative collection.

Both brands say the clothes, from $1,500 hiking boots to $2,700 puffer jackets, celebrate the “spirit of exploration.”

The North Face describes the effort as “Expedition Remixed,” and says the 1990s pieces have been updated and reimagined to “heighten the look, feel and soul of icons.” The jumping-off point is a redesigned version of its 1992 Nuptse jacket. “Each piece is infused with immersive prints, unexpected fabrics and deeper colors. The known becomes unknown again,” North Face says in its sales copy.

The collaboration comes at a time when the North Face is going strong, and one of the best performers in VF Corp.’s stable of brands.

In its most recent quarterly results, VF says revenues at the North Face jumped 31%, for a gain of 29% in constant dollars.

The latest financial news from Gucci, though, is more mixed, with Kering describing recent results impacted by a “transition” between collections. Gucci’s revenue for the latest period rose 4.5% as reported, and 3.8% on a comparable basis. And sales in its directly operated stores climbed 6.9% from the same period a year ago.

These days, the Gucci name is likely to come up more frequently among movie-goers than those shopping for new parkas.

“The House of Gucci,” starring Lady Gaga and Adam Driver, continues to connect with audiences, even in a fractured film-going season. The Ridley Scott-directed film, which has earned plenty of critical buzz, has infuriated the Gucci family.

Variety reported on the uproar among heirs of Aldo Gucci, played by Al Pacino in the film. The publication quotes a family statement, translated from Italian, citing concerns that the film paints “members of the Gucci family as thugs, ignorant and insensitive to the world around them.”

The statement goes on to describe the film’s impact as “an insult to the legacy on which the brand is built today,” and says family members reserve the right to take action to protect their “name, image and dignity."

Variety reports that no legal action has been taken so far.