Verdict On 'Judge' Harvey: What Is This Show Doing In Prime Time? 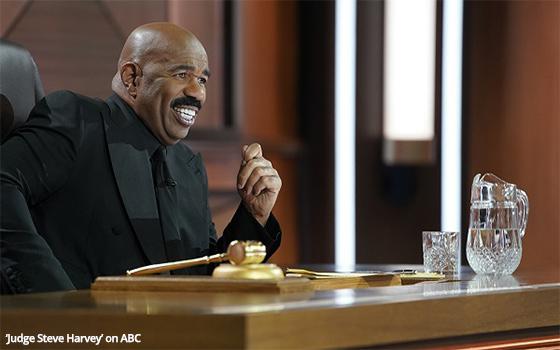 Last month, the TV Blog suggested that a daytime-style court show would feel out of place in network prime time, and that prediction has come true with the debut Tuesday of “Judge Steve Harvey” on ABC.

It is a one-hour judge show produced wholly in the manner of dozens that have come before it that have taken up untold hours on local TV stations’ morning and afternoon lineups.

Like all of those, “Judge Steve Harvey” has ordinary people coming into his TV courtroom to present a variety of small-claims cases.

For example, Tuesday’s premiere has two neighbors battling over a fallen tree limb, sisters arguing over money that was supposed to pay for their brother’s funeral, and a sister suing her brother over unfinished carpentry work.

On the face of it, these cases -- which are similar to the kinds of disputes on view in any number of daytime court shows -- are certainly interesting in a slice-of-life kind of way.

A sister who allegedly took money that was supposed to pay for her brother’s funeral and then spent it on herself? Tempting, right?

Indeed, individual episodes of the court shows succeed or fail on the basis of their cases and just as often on the tangible eccentricities of the parties involved. When one checks in on them, a decision on whether or not to stay is made in a split second.

Having said all that, as the TV Blog cautioned last week, even when presided over by an A-list star such as Steve Harvey, bringing one of these court shows to prime-time TV cheapens the environment on mainstream evening TV even more than it is already.

Judge Harvey does his best to put it across, however. And fans of this likable comedian and TV personality will take joy in seeing him in yet another prime-time show.

As in his other shows such as “Family Feud,” Harvey is smiling as fast as he can in “Judge Steve Harvey” as he hears his cases and issues comments on them that are part common sense and part comedy.

He is not now -- nor has he ever been -- a judge, but he rules on these disputes anyway, although it is not at all certain that his decisions are binding on the litigants.

A show like this one does have a certain low-rent quality, however. One of the most noticeable of their characteristics is the comportment of these litigants who are almost always shown to be ignorant of court procedures and behaviors.

They are train wrecks, which unfortunately is one of the reasons why these shows have had such staying power on TV.

But that is the way things are in the world of daytime broadcast television. Should prime-time go in that same direction? It is pretty obvious that here the answer to that question is no.

television
1 comment about "Verdict On 'Judge' Harvey: What Is This Show Doing In Prime Time?".
Check to receive email when comments are posted.
Next story loading