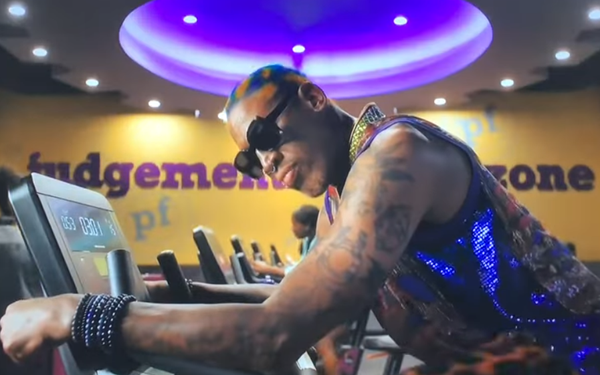 Dennis Rodman and Jane Krakowski -- not your usual pairing -- star in a new campaign for Planet Fitness that advertises a deal until Jan. 6.

The ad, via Publicis, touts a $0 enrollment and $10 a month enrollment fee.

The ad features a group of celebrities, including Krakowski, Rodman and "Black-ish" actor Jeff Meacham. Rodman, in particular, is presented with CGI-supplied digital entrails that suggest he is an otherworldly being.

Similar to a recent campaign from Anytime Fitness, the commercial makes no mention of COVID, which has gutted many gyms. Some expect the industry may not fully recover until 2023 or 2024. The 2021 IHRSA Global Report notes that up to 80% of club members returned to gyms in the first few months of 2021, but recent reports show the Omnicrom variant hitting the U.S. and foot traffic falling off in recent weeks.

Gym owners say the fitness industry still is a long way from recovery.

Gym developer Marc Thomas told The Wall Street Journal that revenue at even his strongest-performing gyms are still 30% lower than pre-pandemic levels.

Because of Omnicron, Thomas said he is considering scaling back a marketing and sales effort he had been planning for early 2022. “Again the recovery has come to a grinding halt,” he told the WSJ.