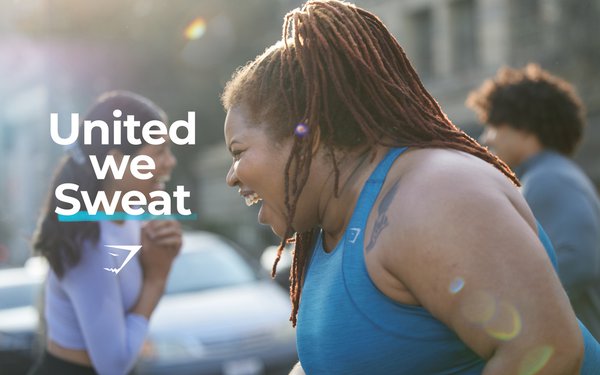 Image above: Latoya Shauntay Snell, who voices the brand's ads.

Fitness apparel company Gymshark, already an "it" brand in the U.K., is setting its sights on North American waters, introducing its first campaign this side of the pond.

Themed "United We Sweat," the new effort focuses on athlete stories that "emphasize the importance of the journey over the destination," says Sennai Atsbeha, Gymshark's vice president of brand marketing. "While every person has a different story, they're all united by this thread of hard work. They share a common commitment to the process."

Gymshark started in the U.K. about ten years ago. And despite its $1.3 billion valuation, it still tries to retain the spirit of its roots: a bunch of kids from Birmingham using Grandma’s sewing machine to stitch up clothes they'd like to wear to the gym. (#stayhumble is an oft-used company hashtag.)

While the new ads include members of the Gymshark community, they aim to show how the brand's aesthetic has broadened beyond the weight room. Among those featured are people like Francis Ngannou, the mixed martial artist; Paralympian swimmer Haven Shepherd; and Latoya Shauntay Snell, founder of the Running Fat Chef. Snell, a self-proclaimed "recovering self-defeatist," also voices the ads.

Showing such different paths to fitness gets to "this idea of celebrating everyday movement," Atsbeha tells Marketing Daily.

He says the new ads, created by Ultra Brand Studio, "showcase the breadth and depth of who we are as a brand. The idea is that they are both aspirational and relatable."

Atsbeha, who worked at Apple and Nike before joining Gymshark's U.S. division about a year ago, says the effort aims to break through the incessant polarization so prevalent today, tapping the sense of community people already feel at the gym.

"There's a place where the world's noise is drowned out by the sound of weights lifting, sneakers squeaking and hearts beating," the voiceover says. "When the world wants to pull us apart, this is our reason to pull together. This is our place."

Pricewise, Gymshark falls in the mid-range. Its $50 pants are more affordable than Lululemon's $90 tights -- but certainly pricier than private label brands from stores like Target and Dick's Sporting Goods.

While the D2C brand recently announced its first brick-and-mortar location in London, Atsbeha says it's committed to its direct-to-consumer model.

"We just want to be the best D2C partner that we can be. It allows us so many advantages in terms of understanding the needs of our consumers, being able to service them with a one-to-one relationship without a third party standing in between us," Atsbeha says.

Initially, Gymshark’s storytelling will focus on women and how athletes train for specific sports, such as Ngannou's upcoming fight.