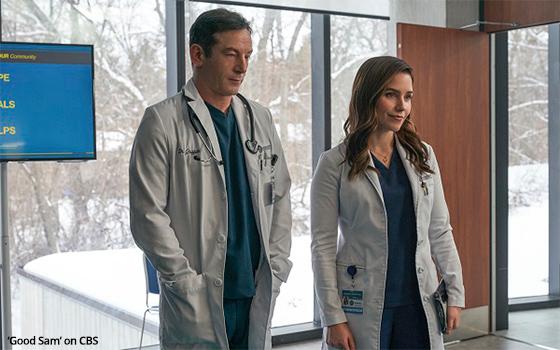 A new hospital drama premiering Wednesday on CBS is basically about an obnoxious bully who gets away with it.

This scenario makes this new show, titled “Good Sam,” at best unpleasant -- and at worst, a challenge for anyone thinking about sticking it out to the end of the first one-hour episode.

Somehow, in the vast pantheon of hospital dramas that have come and gone on TV since the beginning of time, a handful of them that were centered on egotistical doctor types -- such as the bully in “Good Sam” -- figured out how to make them palatable. “House” comes to mind.

In this one, the bully in question is a heart surgeon described as one of the world’s most brilliant, as so many characters in CBS dramas are -- doctors, lawyers, tech whizzes and others.

In “Good Sam,” the victim of this doctor’s bullying is his own daughter, which makes him particularly odious.

She is the “Good Sam” of the title, which was likely coined with the intention of establishing her as the counterpoint to her father, who you might describe as “Bad Dad.”

Like the father who is bullying her, Good Sam is also a brilliant cardiac surgeon. She is on a fast track to becoming the director of this hospital’s cardiac department.

Thus, the two are rivals, since he is already the head of the cardiac unit. And yet, they are family. The tension between them is the central theme of the show, and often difficult to watch.

Oh -- I almost forgot: Good Sam’s mother and ex-wife of her father is also the head of the whole hospital, so she is the boss of both of them.

Maybe this hospital, which is in northern Michigan somewhere, should have been named Nepotism Memorial or some such.

This hierarchy in which this hospital’s three starring players are all from the same family has little or no relation to the real world and is therefore not believable, to say the least.

Although this hospital is apparently a family fiefdom, the show tries hard to convince us that family ties played no part in the advancement of these family members’ careers and that each of them earned their positions based solely on their own merits.

However, a good deal of the first episode flies in the face of that assertion. After circumstances render the father temporarily unable to continue as a surgeon and department head, his daughter is named to take his place.

While this job promotion is credited to a decision made by an unseen board of directors, it is more than reasonable to assume that Good Sam’s mother had more than a small say in the matter.

Good Sam’s promotion riles up her rivalrous father and he then commences with the aforementioned bullying.

In the process, he commits a fireable offense about every minute or so, but nevertheless avoids dismissal simply by pleading with his ex-wife, who still has a thing for him, and his daughter, who is now his superior.

The problem is that Dr. Dad is no lovable rogue underneath a gruff exterior. Instead, he is decidedly unlovable.

At one point while watching this show’s first episode, a random thought occurred to me that this show would be much better off if this Bad Dad character were just jettisoned altogether.

Speaking of fireable offenses, the way the show’s characters carry on with each other would be grounds for dismissal everywhere in the real world.

It is not just that some of them are poised to pair off at some point in the manner of a hundred such past shows, but it is the conflicts of interest that arise from these pairings.

Most notably, Good Sam herself appears to be headed for an intimate relationship with the son of one of the hospital’s biggest donors.

Maybe Good Sam is not as good as we are supposed to think she is.