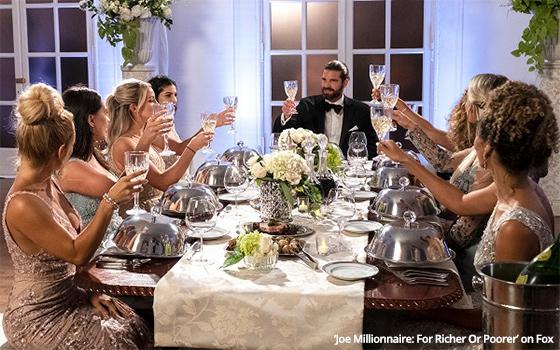 If Fox’s new revival of the old “Joe Millionaire” from 18 years ago is anything like the original, then it could emerge as a breakout comedy hit.

This was a feature of the old “Joe Millionaire” that I had forgotten until I unearthed some of the old stories and columns I wrote back then.

The occasion for digging up these old artifacts was the scheduled premiere of the new “Joe Millionaire: For Richer Or Poorer” on Thursday, January 6 -- the very same date on which the original “Joe Millionaire” premiered in 2003.

The original ran for eight weeks and was a ratings phenomenon. The premiere was watched by 18.6 million people. The show’s final hour was seen by 40 million.

That was the episode in which the show’s “millionaire,” Evan Marriott (who was actually not a millionaire) chose contestant Zora Andrich for a made-on-TV relationship that went nowhere.

For a time, the two were household names. But a second “Joe Millionaire” series the following fall was a dud.

As things turned out, “Joe Millionaire” was a one-off hit whose success could not be duplicated a second time. Cut to 18 years later and Fox is at it again.

Perhaps the network feels enough time has passed for another “Joe Millionaire” to emerge once again as a mid-winter television event -- a “talker,” as one of my former editors used to describe TV shows that had people talking during and afterwards.

That remains to be seen because, among other reasons, Fox did not provide an opportunity for the TV Blog to give Thursday’s two-hour premiere a look-see in advance.

With any luck, though, the new one will be as hilarious as the first. The premiere of the first “Joe Millionaire” on January 6, 2003, “was genuinely hilarious,” I wrote then. “It was so ridiculous that I basically laughed for the entire hour.”

Among its funniest features was a ludicrous, cartoonish “butler” character played by an Australian actor who stole every scene he was in.

“I don’t know what was funnier,” I wrote, “the pompous ‘butler’ who was on hand to stage-manage the proceedings; the spectacle of 20 grown women making a mad dash for 20 evening gowns; or the looks on some of the gals’ faces when they got their first look at Prince Charming, a.k.a. Even Marriott.”

Marriott, who was then a $19,000-a-year construction worker, first entered the picture on horseback looking like a lord of the manor (or perhaps a seigneur du manoir since the show was filmed at a French chateau).

When watching the old show, you had the feeling that the people who produced it were sending surreptitious signals that the whole thing was absurd and you, the viewer, were in on the joke.

The only participants who seemed to be taking it seriously were the 20 gold-diggers who each hoped to ensnare this millionaire.

“In their competitiveness and slavish pursuit of money, the ‘girls’ -- as Evan constantly referred to them -- represented a collective insult to women everywhere,” I wrote, but then added: “That’s not enough to condemn a reality show, of course.”

“Joe Millionaire: For Richer Or Poorer” premieres Thursday night at 8 Eastern on Fox.