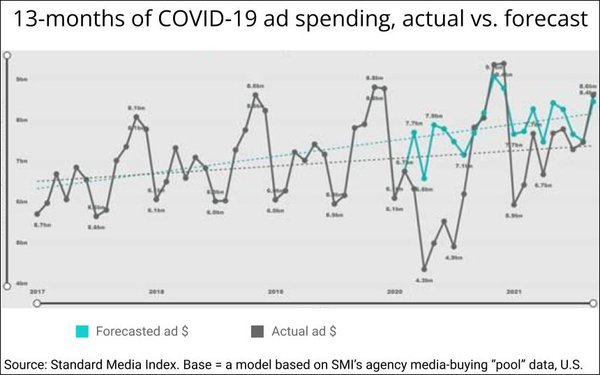 The U.S. ad industry lost $17.3 billion over the 13-months of the COVID-19-related ad recession, according to a unique new analysis by Standard Media Index (SMI).

The analysis, which is based on SMI's "pool" of data of actual ad spending by major agency holding companies and independent media-buying services, utilizes a "COVID deficit backcast model" developed by SMI's analytics team fo calculate what the material loss was between a forecast of what advertisers would have spent if not for the pandemic, vs. what they actually spent.

SMI said it also applied the model to analyze the explicit impact on specific digital and traditional media, and has added it as an applet to its customer dashboard for any subscribers who want to conduct their own analyses.

"That share shift has mostly to do with how hard traditional media got hit, namely national television, as well as radio, print and outdoor," the SMI analytics team writes in a client report provided to MediaPost. "Digital media did not actually gain more ad spending during the COVID era than our model projected for it, it just didn’t fall short nearly as much as traditional media was."

The analysis is noteworthy given that new spikes in the Omicron variant of the COVID-19 virus are leading to various new shutdowns, social distancing and other disruptions that could have some impact on ad spending plans going forward. While SMI did not provide model for projecting what that impact could be, various ad industry economists have indicated that the impact of the pandemic is already baked into future forecasts and it unlikely to have a material effect.

In fact, the Big 3 ad holding company forecasters from GroupM, IPG and Publicis last month described 2021 as a "planetary realignment" that would drive worldwide ad spending up nearly 20% vs. 2020 and projected 2022 would rise more than 10%.