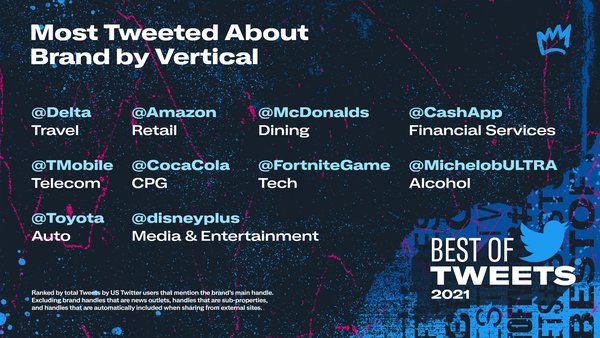 Twitter joins the legions of companies and media outlets rolling out year-end lists with its #BestofTweets, ranking 2021 brands’ posts in two different categories: quantitative -- “based on algorithms that ranked brands by various elements such as total mentions, likes, retweets, quote tweets, replies and views”; and qualitative -- “hand-selected by our internal creative powerhouses on the business marketing team,” the company explained.

Entertainment brands ruled the more-objective quantitative rankings, with all counts taken during the Jan. 1-Oct. 31 period.

It was the streaming platform’s first full year of operation, but it owns so many major and newsworthy entertainment brands that put out new content in 2021 -- from Marvel to “Star Wars,” plus the Beatles documentary “Get Back” -- it’s no wonder it topped the list. Disney+’s individual Twitter account was handled by Publicis Groupe.

The most popular brand on Twitter was @nickjr, according to Twitter internal data that counted total likes, retweets, quote tweets, and replies by U.S. Twitter users on a brand’s tweets.

Nick Jr. is a channel for pre-schoolers, but its Twitter feed is obviously geared to parents. As an example of Nick Jr.’s strong performance, Twitter included a link to a tweet that went viral, which tapped into the nostalgia of millennial parents for a show they’d watched when they were young, “Blue’s Clues.”

The actor Steve Burns posted a video for the show’s 25th anniversary that “sparked an emotional exchange on Twitter and gave many fans the closure they didn't know they needed,” according to Twitter.

Most-tweeted brand hashtagwas #NintendoSwitch, ranked by total tweets from U.S. Twitter users that included the brand’s campaign hashtag. There are more than 91 million gaming fans, notes Twitter. “By connecting with each other to weigh in on highly anticipated game releases and in-game updates, this vast and vocal community propelled this Nintendo console to the forefront of gaming conversation with no signs of slowing down.” Nintendo’s Twitter account was handled by Wethetweet and Reprise Digital.

Twitter also ranked the most-tweeted brands by verticals. Not surprisingly, some of the biggest companies in the world won their rounds, as also noted in the chart above. Among those were Delta in the travel category, Coca-Cola in CPG, McDonald’s in dining, Amazon in retail, Toyota in auto and Michelob Ultra in alcohol.

Among the Twitter campaigns picked as best by branding experts was skin care brand CeraVe's #ThankYouNurses. “We were all thinking it, but CeraVe said it best” with a campaign that celebrated “the heroes risking their lives on the front lines during the pandemic — and who continue to do so every day.” The company also developed a Twitter Takeover Trend that allowed other grateful users to share “their own heartfelt messages.”

Twitter’s business marketing team picked #OREOscope as the best campaign to creatively push the envelope. “When a fan liked an @Oreo Tweet, the beloved cookie analyzed the fan’s most recent Tweets to share a personalized Oreo horoscope with tasty insights about their personality — and that’s the kind of ‘Stuf’ that inspires innovation,” the team noted. Oreo’s Twitter account was handled by Vayner Media, Martin Agency and 360i.