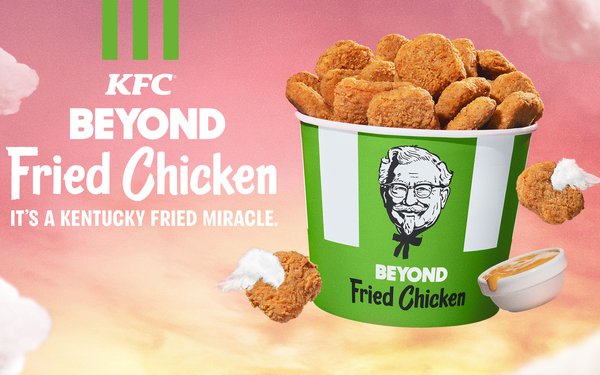 Following consumer testing that began in 2019, Kentucky Fried Chicken will roll out plant-based Beyond Fried Chicken on Jan. 10 on a limited-time basis in a partnership with Beyond Meat Inc.

Today’s news from KFC comes two days after Chipotle Mexican Grill went national with plant-based chorizo—also for a limited time—without the involvement of either Beyond Meat or its major competitor, Impossible Foods Inc.

A KFC rep tells Marketing Daily that the national launch of Beyond Fried Chicken will be advertised on television along with KFC’s and Beyond Meat's social channels beginning Sunday night.

In August of 2019, KFC was the first national QSR chain to introduce plant-based chicken. First came a limited-run test in Atlanta, followed by tests last year in North Carolina, southern California and Tennessee.

In a news release, KFC says Beyond Fried Chicken has “the same taste and texture of whole muscle chicken so that it pulls apart like KFC’s traditional fried chicken breast with KFC’s signature breading.”

It will be available nationwide “while supplies last.”

On Monday, Chipotle rolled out a new plant-based chorizo for a limited time at all of its U.S. locations following tests this year in Denver and Indianapolis. Its roots are explained in this spot.

It’s Chipotle’s second national vegan offering behind Sofritas, which are made from spiced organic tofu and debuted in 2014.

As previously reported, McDonald’s has been testing a plant-based McPlant burger in partnership with Beyond Meat and is expected to expand its availability this year.