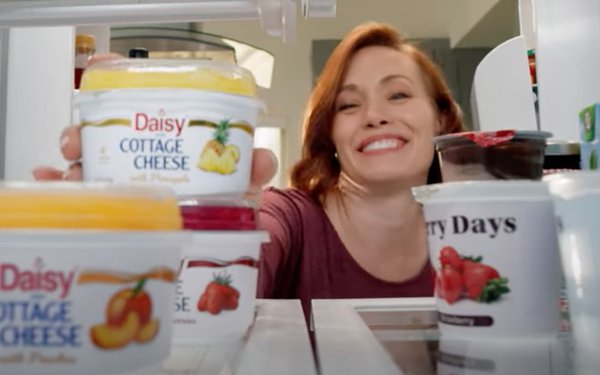 Does cottage cheese have yogurt envy?

As of 2019, Americans consumed about 15 pounds of yogurt per capita compared to just two pounds of cottage cheese.

Daisy Brand wants to change that stat with new single-serve tubs of cottage cheese accompanied by a compartment of fruit.

In its advertising campaign, the company seeks to recast cottage cheese as a versatile meal or snacking choice when people look in the refrigerator.

The target audience for this “Grab A Daisy” commercial from the Blue Chip agency is consumers ages 35-54—in particular, busy moms, active dads and fitness-focused women.

“So ‘Grab a Daisy’ is the action rather than a copy point. We’re depicting real moments with identifiable characters who are already comfortable with fruit and yogurt as options.”

Why does the commercial focus on the product’s convenience and taste, but not in opposition to yogurt ?

“It’s more powerful to show than tell in this case,” Maasen says. So we have our mom glance around her fridge, then make a choice to choose Daisy cottage cheese instead of yogurt.”

The single-serves come with either strawberry, pineapple or blueberry and soon, peach.

The commercial is running on more than a dozen cable television networks along with networks including ABC, CBS and NBC.

In a 2019 story published by The Atlantic, Moshe Rosenberg, a professor of food science and technology at the University of California at Davis, noted that cottage cheese consumption has lagged that of yogurt because the latter had added a variety of flavors.

“I would dare to say that had there been the same effort to dress up cottage cheese with new flavors and new ingredients, we would see a much higher consumption of cottage cheese,” Rosenberg said.