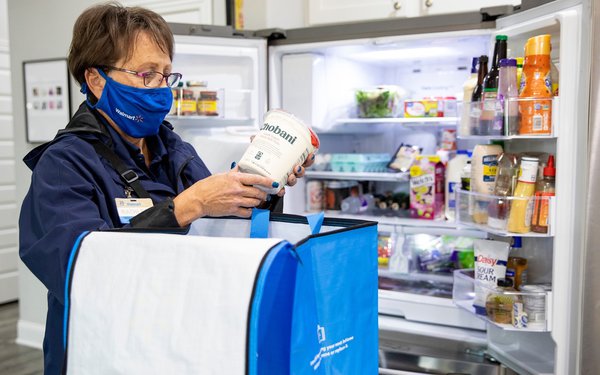 Ecommerce now accounts for 13% of all grocery purchases, a gain of two percentage points from the previous year. And roughly 70% of all households placed at least one online grocery order during the year.

The data, from the new Brick Meets Click/Mercatus Grocery Shopping Survey, also shows that despite the strong push toward home delivery from companies like Amazon, Instacart, DoorDash -- and, most recently, Walmart -- customers prefer to pick up their groceries at the store.

Pickup’s share of the ecommerce pie grew to 45% in 2021, up five percentage points. Delivery’s share stayed relatively flat at 33%, while ship-to-home orders accounted for 22%, a five-point drop.

“Even before the pandemic started, Pickup was preferred over Delivery,” says David Bishop, partner at Brick Meets Click, in its report. “Then in April 2020, Pickup took the top spot away from Ship-to-Home, and it’s kept that spot ever since.”

The report comes just as Walmart is rolling out a massive home delivery effort. Last week, it announced plans to hire 3,000 delivery workers to help make its InHome service, currently testing with some 6 million households, available to 30 million.

First launched back in 2019, the service will now cost $19.95 per month and $148 per year. There are no additional fees, and the company says tips are built into the membership price.

Customers can extend one-time access to their InHome associate using an existing smart lock or a garage keypad, or purchase a new smart lock from InHome for $49.95.

Brick Meets Click, a research firm based in Barrington, Illinois, also says that the average number of grocery orders remained relatively consistent at 2.74 per month, which it says signals more entrenched shopping habits.

The new analysis also detects an increase in people placing at least one order with a mass store. In December, 29.1% of shoppers did so, setting a record high. “Cross-shopping with Target rose sharply while Walmart dipped slightly and the gap between the two retailers shrank to only two and a half percentage points, the smallest it has ever been,” the report says.