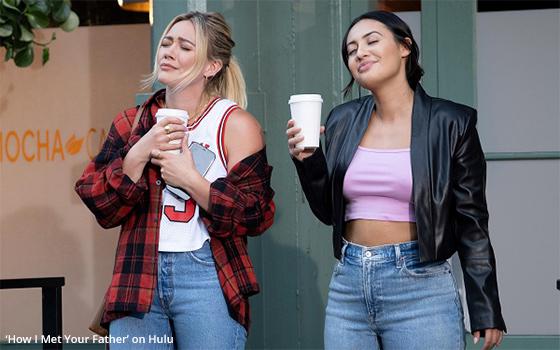 A new sitcom coming to Hulu this week serves as a reminder that when it comes to acquiring and developing TV shows, the TV business today is unpredictable.

I have no inside knowledge about how this new show wound up on Hulu, but one might be excused for wondering why it is not on CBS.

This one changes the focus to a female lead character, reflected in the title “How I Met Your Father.”

In this one, the story is told from the future (2050, to be exact) by a very grown-up Sophie. For the record, “How I Met Your Mother” was told from the vantage point of 2030. Time marcheth on.

In “How I Met Your Father,” the younger Sophie is played by Hillary Duff (above photo, left), who is positioned as the star of the show -- but not by much since the show has an ensemble of characters not unlike the old one.

Older Sophie is played by Kim Cattrall, recently AWOL (wisely) from the new “Sex and the City” sequel “And Just Like That …”

In “How I Met Your Father,” she is seen at the beginning of the show and then, just like that, she settles in as narrator in the same manner as the late Bob Saget on “How I Met Your Mother.”

The story that forms the foundation of the new “Father” starts up in the manner of the “Mother” series as well.

Although the TV Blog didn’t watch the new one past Episode 1, based on that episode it is reasonable to assume that the story in “Father” plays out pretty much along the same lines as the “Mother” show.

This is why one wonders why this show didn’t go to CBS, where it may have emerged as a hit show with staying power and consistency just like the old one.

Again, not that I have any knowledge of whether or not CBS may have been in the running for this show, but it does seem like it would have been a no-brainer for the network.

As for the show, it feels capable of drawing the young-adult audience at whom it is aimed. In this way, the show could turn into CBS’s loss and Hulu’s gain.

“How I Met Your Father” starts streaming on Tuesday (January 18) on Hulu.

digital, hulu, streaming, television
1 comment about "Reboot Of 'How I Met Your Mother' Went To Hulu And Not CBS".
Check to receive email when comments are posted.
Next story loading