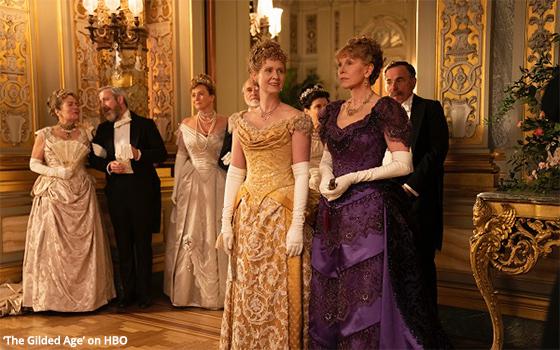 Producer Julian Fellowes’ long-awaited follow-up to “Downton Abbey” was first announced four years ago and was supposed to be headed to NBC.

The show, “The Gilded Age,” finally arrives next week -- not on NBC, but on HBO. Weighing the unique characteristics of each of them, HBO seems like the better home for it.

It is a sumptuous series that, by the looks of it, likely required the kind of investment in production that the TV industry has long associated with HBO.

Moreover, the intrusion of commercial breaks would be ruinous to the production and presentation of a show like this.

So, is “The Gilded Age” worth the wait? The answer is: Most definitely.

Inevitably, it will be compared to “Downton Abbey” because that show, seen in the U.S. on PBS, emerged as one of the most storied shows in all of television, past and present.

Other critics might use their opportunity to review “The Gilded Age” this week and next to come to judgement on that very subject. The TV Blog, however, has no interest in the “which one is better” question.

“Downton Abbey” was the kind of TV show that comes along once in a lifetime if you are lucky. As such, comparing a subsequent series to something like that one seems unfair.

Having said that, aspects of “The Gilded Age” do bear similarities to “Downton Abbey.” “The Gilded Age” is set in New York in the 1880s and it is almost entirely focused on the aristocracy of the era and their great houses.

This elite group comprises two factions. One is the so-called “old” New York families who feel they are the top social group in the city. Cynthia Nixon (above left) and Christine Baranski play sisters of old Dutch lineage who represent this group.

The other faction is a growing group of new, powerful barons of industry who, generally speaking, are much wealthier than the old guard.

And they not only seek entry into the city’s most elite social circles, but they wouldn’t mind at all if their crowd took over the city’s top social echelons entirely.

The tension between these groups is the main storyline of the show. But wait, there’s more. Like “Downton Abbey,” “The Gilded Age” takes place both upstairs and downstairs, the latter group made up of butlers, footmen, cooks and lady’s maids.

In great measure, the success of “Downton Abbey” lay in the show’s astonishing attention to detail. Fans of that show who might expect the same meticulousness in “The Gilded Age” will not be disappointed.