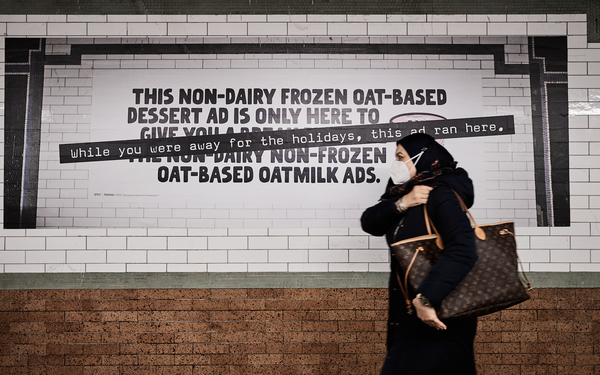 When oat-drink pioneer Oatly Group went public last year, the Swedish company declared that it had “torn down the traditional corporate approach to brand building.”

Yes, it ran a Super Bowl ad last year and yes, it does lots of digital marketing.

But unlike many CPG brands, Oatly is enamored with traditional media channels like OOH. And it’s not wed to the usual key performance indicators to track advertising success.

That could be due to the company’s founding in 1994, when it sought to provide a dairy alternative to people who were lactose-intolerant, also aiming to reduce the climate impact of dairy farming.

Its nontraditional approach can also be traced the “dismantling” of Oatly’s marketing department several years ago “to ensure that the entire company was saturated with the brand and that our creative was top-notch,” in the words of North America executive creative director Heidi Hackemer.

Hence the establishment of the in-house unit named the Oatly Department Of Mind Control, which handles creative concepts and digital media, while the PHD agency works on “more traditional media buys,” says Hackemer

Oatly’s not shy about critiquing its vibrant packaging as “weird.” In this video, company executives say they want to use it as “a billboard” made by “a bunch of oat punks like down in the basement or something.”

Even the company’s website home page is a bit strange. Try to scroll up and down, and the copy and images go sideways.

In December, Oatly took over the Wall Street subway station in lower Manhattan with 26 OOH “wallscapes” and four video billboards. It came at a typically slow time of the year for the station, where the pandemic had further reduced foot traffic.

This month, the brand installed new messaging on top of the original station creative to tell people they might have missed the original ads.

In this interview, edited for brevity and clarity, Hackemer talks about the lure of OOH media and corporate creative obsession.

Hackemer: There’s something amazing about the tangibility of OOH and, also, the wow factor in a world where everyone is spending way too much time looking at these glowing, pixilated screens. To move through a space and almost be able to touch your brand—I think there’s something almost primally gratifying about that. Also, just the awe of looking up and seeing a big-ass billboard—there’s just something really cool about that.

CPG FYI: Why did you choose such a slow time of the year?

Hackemer: If our creatives are having a fun time with something and they come up with a fun idea and we can make it happen, we’re going to make it happen. We’re a very unusual department. We are not obsessed with data or hacking algorithms or doing the stuff that a lot of marketers are doing today. We are obsessed with creativity.

CPG FYI: When you launched phase #1 of the subway ads, were you intending to do this month’s follow-up?

Hackemer: Absolutely. That was big from the beginning. If we’re going to take over Wall Street—not only at the deadest time of the year but also in the midst of the pandemic—we might as well acknowledge that people weren’t there. We’re always very aware of the advertising experience of the viewer and always trying to point a finger to "yes, we know this is an advertising construct, yes we know you’re an intelligent viewer, yes we know what’s going on in the world."

So to do phase two was classic in how we mess with people and have fun with our audiences.

CPG FYI: To use an overused term, what kinds of KPIs do you use to track the effectiveness of OOH?

Hackemer: We’re probably not going to be entering the [effectiveness of advertising] awards anytime soon. It’s not going to happen. I know this sounds like sacrilege, but we aren’t measuring things like brand awareness—especially in the harder-to-measure spaces.

When we look at effectiveness, we look at whether people excited about our product and if it is selling out. We’ve never been able to keep enough product in stock. That seems to be pretty damned effective. When it gets down to the ultimate measure of effectiveness—sales—I think we’re pretty confident to say that people are continuing to engage with us.