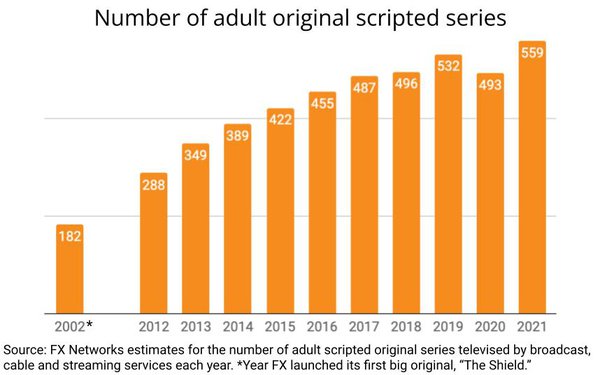 Sometimes, this column lives up to its name and actually talks about time, especially, "real time." Today is one of them. In this case, it's about the supply of network TV programming the average American has available to watch in real time. And while it may seem quaint now, looking back over time, to point out that it's more than any person could actually watch -- ever, even if recorded for future viewing -- because we all have a finite amount of time that we can actually do things.

It's been nearly a decade since I first learned about an analysis FX Networks had begun benchmarking and tracking over time showing the supply of original TV programming available to the average American. I learned about it from Ed Martin, an editor and TV critic who had just returned from a Television Critics Association conference where FX presented it and the most important takeaway wasn't how much original programming there now was, it twas that it was more hours of content than a person could actually watch during all their waking hours.

Since then, the supply has nearly doubled to 559 adult original scripted series (see table above), which now also includes ones available on streaming services, which makes sense since they are the modern day equivalents of television networks -- and most likely their future.

Methods of distribution aside, the point here is that the supply of something we normally associate with our most premium human attention -- you know, "prime time" or whatever term you want to use for it -- has expanded to the point where it is, as another friend, Joe Marchese might call it, "sub-prime." Or put another way, what we think of as our most "premium" content, is now a "commodity." Or if not a commodity, at least an over-abundance that is fueling fragmentation and a form of cultural division.

While it may not seem as concerning as the kind of fragmentation and division created by the expansion of news networks, especially extremist ones hellbent on radicalizing their viewers, the embarrassment of entertainment programming riches is leading to a different kind of cultural fragmentation that in some ways may be good, but in other ways means there are fewer organizing principles for what pulls us together as a society.

Yes, we still have the Super Bowl, the Olympics, and certain big event programming that generates the kind of buzz and "water-cooler" talk that defines mass culture, but it's getting fewer and more far between.

One he upside, we now have more choice than a kid who grew up watching the same episodes of "Gilligan's Island," "Beverly Hillbillies" and "I Dream of Jeanie" over and over and over again could ever have imagined. And that means there no longer is ever a reason to waste your time with something that isn't original and reaches a standard that merits your attention.

On the downside, it means we are more fragmented than ever before, which creates new problems for anyone trying to target, reach and sustain the attention of people over time, especially mass marketers.

That trend line is one of the reasons the late great media planner Erwin Ephron came up with the concept of "recency" planning, but I wonder what he would say -- or call his next new concept -- if he were alive to see the overabundant media environment we live in today. Or more to the point, the one we will be living in in the future.

I'll do my best to channel my inner Ephron and suggest that instead of recency planning, it might be called "decency" planning, because the new standard bearer for human attention is that media content -- whether it adult original scripted series, news, sports, gaming, or even, you know, advertising -- has to reach a floor value that it is at least decent enough to spend our time with.