What The Dickens? New Drama Series Has Lofty Literary Ambitions 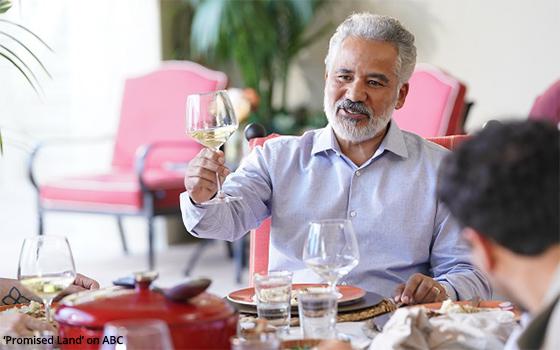 The positioning of a new ABC drama series as a literary and cinematic work descended from the work of Charles Dickens, John Steinbeck and John Ford raises great expectations that will not likely be met.

“It was the best of times; it was the worst of times,” said a recent emailed press advisory from ABC in its very first sentence. They are the first 12 words in the famed, lengthy first sentence of A Tale of Two Cities by Charles Dickens (full sentence below*).

This publicity document was styled as a personal, heartfelt letter to journalists from Matt Lopez, creator and showrunner of this new drama series titled “Promised Land” and scheduled to premiere next Monday (January 24).

The show seems to be a prime-time soap about several generations of a wealthy Latin-American family who produce wine in California’s Sonoma Valley. John Ortiz, pictured above, plays the family patriarch.

So, what does this have to do with A Tale of Two Cities, a novel about France at the time of the revolution?

“A few words about the inspirations/influences for this show,” says this audacious letter from the producer.

“First, the man whose words grace the top of this note -- I like to say that Dickens wrote television,” he writes, striving to establish an equivalency between Charles Dickens and the writers of prime-time TV soaps.

The producer goes on to equate specific characteristics of the work of this literary giant with TV shows. For most of us, this would constitute an apples-to-oranges comparison that does not add up. But for the producer, it is an apples-to-apples one.

“Many of [Dickens’] great novels were actually written as serialized weeklies, and while he delivered all the juicy cliffhangers and plot twists befitting of that genre, he simultaneously strove to say something very real and very true about us -- our wants, desires, hopes, passions and all-too-human frailties,” Lopez writes.

Unfortunately, we will never know what Charles Dickens might have made of this comparison of his work to “Promised Land,” or, for that matter, what he may have made of television in general.

Then, it is on to John Steinbeck, possibly the most famous American author of the 20th century whose many novels included The Grapes of Wrath, Of Mice and Men, Tortilla Flat, Cannery Row, East of Eden and more.

East of Eden is the Steinbeck novel Mr. Lopez cites specifically as one of his inspirations for “Promised Land.”

“If you reduced this great novel to a logline, you’d have one hell of a network drama,” he writes.

Well, there’s your problem right there -- suggesting that this great work of literary art be reduced to a mere logline. Oh well, that’s television for you.

John Steinbeck is “one of the two Johns who are a creative north star for this show, the other being Ford,” continues the producer’s letter.

It then claims that “the level of cinema” seen in “Promised Land” will compare favorably to the “scope and sweep” of John Ford’s films.

“His films [which include the 1939 film version of The Grapes of Wrath] are justifiably known for their scope and sweep, and in our first two episodes, I think you will find a level of cinema not often seen on network TV, or any TV,” says the producer.

This does not seem possible to achieve. John Ford’s best-remembered movies are Technicolor western masterpieces known for his famed longshots of some of the natural wonders of the American West, most notably the spectacular Monument Valley in Utah.

It is difficult to imagine a TV show made for network television coming anywhere close to those.

For the record, the TV Blog bears no animus toward Mr. Lopez or his TV show. As a matter of fact, the producer’s confidence in himself and his show is laudable. Who knows? Maybe “Promised Land” will emerge as a show worthy of its inspirations.

Still, the suggestion that “Promised Land” will rise to the literary heights of Dickens and Steinbeck or stand shoulder to shoulder with the cinematic triumphs of John Ford is hard to accept.

However, based on this build-up, the TV Blog looks forward to watching “Promised Land” and writing on it in advance of its premiere next Monday night.