Why COVID Increased The Gap Between Fixed And Wireless Internet 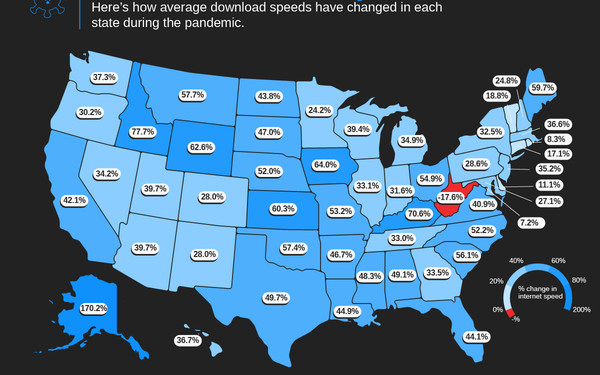 I recently wrote another MediaPost column speculating that COVID-19 is the new Y2K, because both those events forced consumers and business to accelerate their technological upgrades. This week, I received new evidence confirming that, but it also suggests that when it comes to using digital media, the fixed internet made inroads over the wireless kind.

I think that was an unexpected consequence of the COVID-19 pandemic and the fact that more people were forced to live -- and work -- more of their lives at home, as well as the fact that promises of a rapid nationwide 5G rollout have yet to be fulfilled.

The result is, the gap between fixed internet and mobile internet speeds in America has gotten bigger.

According to a speed test analysis released this week by WhistleOut, the average U.S. internet speed increased 40% during the pandemic to 118.4 Mbps, versus an average of 84.5 Mbps pre-pandemic.

The report, which is based on more than 717,000 internet speed tests, doesn’t explain exactly why the fixed internet became so much swifter, but it cites the fact that many U.S. households upgraded their plans with their internet service providers, presumably to accommodate all that video streaming, those Zoom meetings, and other lifestyle changes necessitated by working and living at home 24/7.

“Some internet service providers, like Cox, also increased overall internet speed for some plans in response to the pandemic,” the report notes.

Whatever the reason, the fixed internet experience grew proportionately better than the wireless one by at least one measure, the ability to download content and applications.

According to the most recent data from Speetest.net, the average mobile internet download speed in the U.S. currently is about 54.4 Mbps, or less than half the fixed internet’s.

Why is this important? Because while the average mobile user probably doesn’t see much difference in the quality of most mobile applications and content, including audio and video streaming, there are future bandwidth-hungry applications (things like the metaverse, AR, VR, Web3, etc.) that will depend on an increased download speed.

Also, if you’re someone like me who can’t wait to cut the cord entirely and shift from a fixed broadband provider to a 5G -- and someday a 6G -- household router, you still have to bide some time, because the only thing slower than wireless broadband speed is the time it takes to roll out the next generation, at least in the rural area where I reside.

Maybe that’s why I spotted trucks from my local cable/broadband provider upgrading our coaxial lines to fiber.

covid-19, internet
1 comment about "Why COVID Increased The Gap Between Fixed And Wireless Internet".
Check to receive email when comments are posted.
Next story loading