Was COVID The New Y2K? 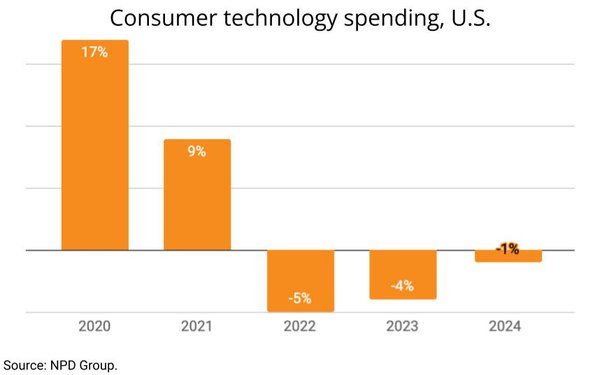 That’s a question that occurred to me last week while speaking with the smartest economist in the advertising and media industry, GroupM’s Brian Wieser.

Brian and I didn’t actually discuss that point explicitly, but we did talk about some new research conducted by GroupM that indicates American consumers are throttling back on new technology adoption, and one of the reasons likely is the COVID-19 pandemic.

Actually, two of the reasons.

One is that, after two years of on-again, off-again pandemic social distancing, shutdowns, COVID protocols, remote working, remote learning, or complete and utter disruption, American consumers simply are burnt out and not looking for a whole lot of change. At least not right now.

But the second reason isn’t one I discussed with Wieser, but began to think about afterward -- which is that in the same way Y2K preparation forced the acceleration of technology investment, COVID-19 did too. Yes, it accelerated technological change among businesses that had been slow-walking things like “digital transformation” in order to adapt to rapidly changing consumer, as well as their own organizational/employee needs -- but it also accelerated consumer investment in new technology for similar reasons.

Much of the focus has been on consumers adopting new technology in order to supplement stay-at-home lifestyles -- including better TVs, computers, streaming services, video conferencing, and maybe even new home-based ventures -- as some were displaced from their day jobs, or to the earlier point, just got burnt out and wanted something new.

Whatever the reasons, 2020 was a year of accelerated spending on consumer electronics and technology, much the same way it was for businesses accelerating their own “digital transformations.”

But remember the last time that happened in a significant way? You know, the lead-up and preparation to Y2k, when rudimentary machine-clock programming was supposed to be the end of the world as we know it, when the clock struck midnight on January 1, 2020, and nothing was supposed to work again. Unless you prepared by investing heavily to update your core technology?

Well, that was a boon for enterprise investment in technology. It also correlated with a dot-com boon, which was being fed by accelerated technological investment. And what happened after Y2K? Both technology spending and dot-coms went bust.

In retrospect, economists attributed at least part of that to a hangover effect following a period of hyper investment.

While 2020's technological acceleration likely was not as profound for businesses as 2000’s, it probably was for consumers, hence my Chicken Little thinking for the consumer electronics sector.

Some lagging data seems to support that too. Not just GroupM’s consumer research, but some hard numbers coming out of the consumer electronics industry. According to stats released Friday by NPD Group, the U.S. consumer technology industry rose 9% in 2021 -- nearly half the 17% it expanded in 2020.

“With such high levels of purchasing in 2020 and 2021 driven, in many cases, by pandemic lifestyle changes, we are seeing a larger, and younger, installed base for a number of devices,” NPD Vice President-Industry Advisor Stephen Baker explains in Friday’s release, adding: “This will inevitably slow consumer needs in the immediate future for technology updates and upgrades.”

As significant as the acceleration and deceleration of consumer spending on technology may be for the marketing industry, I'm also wondering what the story is for industrial spending, and whether we'll see a corresponding crash following the hyper-acceleration of digital transformation that has taken place over the past couple of years.

Anecdotally, we've all heard quotes about how 2020 was the equivalent of "three years" or "five years" of transformation for some businesses.

Again, much of what we're looking at is lagging indicators so we may not know for some time, but it interestingly corresponds with a near-term outlook in which certain kinds of technology -- especially Web3-related ones -- is expected to boom.

On the bright side, much of that innovation is likely to be funded by venture capital or public markets, not from conventional Cap Ex outlays, but even so.

How many Facebooks -- er, I mean Metas -- can afford to plow $10 billion annually into making that happen? Nor do most of them have advertisers footing that bill.