T-Mobile: Netflix 'Still On Us' Despite Price Hike 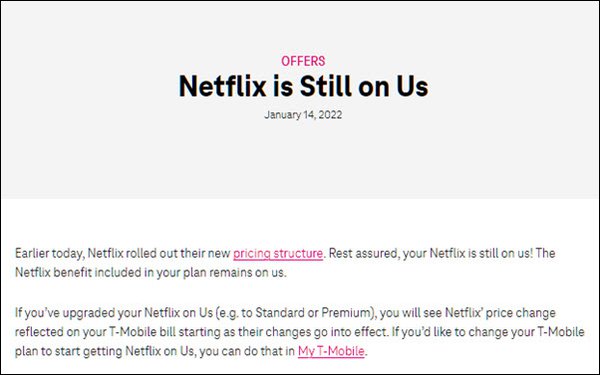 “Rest assured, your Netflix is still on us,” a new message on T-Mobile’s website stresses. “The Netflix benefit included in your plan remains on us.”

Customers may opt to upgrade their Netflix plan and pay the difference between the two plans. “If you’ve upgraded your Netflix on Us (e.g. to Standard or Premium), you will see Netflix’ price change reflected on your T-Mobile bill starting as their changes go into effect,” the new messaging explains. “If you’d like to change your T-Mobile plan to start getting Netflix on Us, you can do that in My T-Mobile.”

T-Mobile is also currently offering promotional deals that include a year of free Paramount+ or Apple TV+.