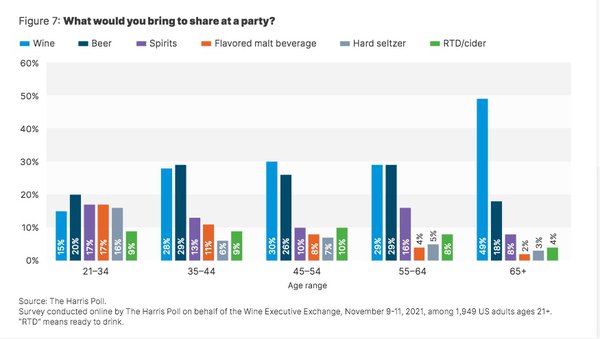 Can marketing make wine cool again? Or at least as catchy as milk or eggs?

Recognizing wine’s declining popularity among younger demos -- and that the industry’s media spend lags far behind beer and spirits --  a group of four industry experts are raising money to get a federal go-ahead for a joint marketing push comparable to what other agricultural-based industries have done, such as milk (“Got Milk?”) and eggs (“The Incredible Edible Egg”).

The four have formed WineRAMP (Wine Research and Marketing Project), aiming to “build and enhance the image of wine in the U.S. marketplace, and promote the positive attributes of wine to current and new legal-age consumers.”

WineRAMP, led by Rob McMillan, executive vice president/founder of Silicon Valley Bank’s (SVB) Wine Division, has so far raised $650,000 from suppliers, wineries, vendors and others toward the $2 million needed to apply for a U.S. Department of Agriculture National Research & Promotions Order designed to “help producers and handlers work together to solve marketing problems that they cannot solve individually.”

"The lesser interest in wine among younger consumers, coupled with the encroaching retirement and decreasing wine consumption of wine-loving baby boomers, poses a primary threat to the business,” stated McMillan in officially announcing WineRamp upon publication of SVB’s 21st annual State of the Wine Industry Report.

The report includes disturbing industry statistics, like a recent Harris poll that found 49% of those over 65 would bring wine to a party, but the figure dropped 20 percentage points to 29% among 55- to 64-year-olds, was about the same for 35- to 54-year-olds, and plummeted to just 15% for 21- to 34-year-olds.

“Versus beer and spirits, we’re not doing as good a job in bringing in new customers,” Dale Stratton, president of the Wine Market Council said during a Wednesday online discussion of the SVB report. “It will become more difficult to grow [by] relying on the same people spending more money.”

“And they’re older,” added Danny Brager, owner/analyst of Brager Beverage Alcohol and one of the four WineRAMP volunteers, the others being Dale Stratton,, and MJ Dale, founder/CEO of consumer data firm Customer Vineyard.

But it’s now time for the volunteers to make way for a permanent staff, McMillan said. “We think this is the right time for the industry to unite and come together.”

That strategy has actually been tried before.  Back in 1999, the Wine Market Council ran a campaign, “Wine. What are you saving it for?” It was developed by Bozell (since absorbed into Interpublic), which was previously responsible for such campaigns as “Pork: The Other White Meat.”

The earlier wine campaign ended, McMillan said, due to “a lack of industry alignment when market conditions began to feel better” and “a voting structure that gave too much power to too few wineries.” Still, he added that the tagline “Wine. What are you saving it for?” succeeded by growing wine use beyond just special occasions.

Of course, consumers can’t either save or use wine if they don’t feel the need to buy it in the first place.

So, to “engage younger drinking-age consumers to love wine” and “see that wine is a cool thing,” McMillan says the wine industry must take a cue from the beer and spirits industries by once again upping its marketing game.

During the online discussion, he displayed figures based on research from Kantar Media and Impact Databank that showed average annual media spending from 2017 through 2020 at $1.4 billion for beer, $457 million for spirits, and just $90 million for wine, with half of that spent on print advertising.

“We would like to see a rising tide for the industry,” McMillan declared.