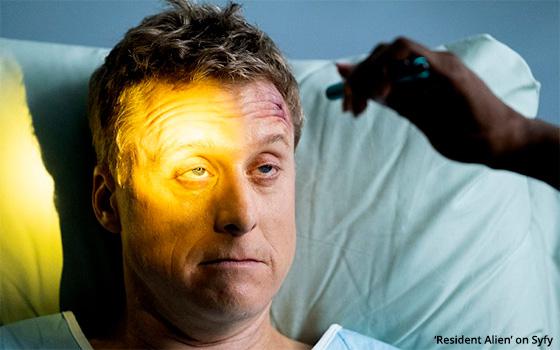 The second seasons of TV shows covered previously in the TV Blog seldom come up again here, but “Resident Alien” is a rare exception.

This series about a strange visitor from another planet who tries to fit into the society of a small American town after crash-landing on Earth was one of last year’s most pleasant surprises.

It starts its second season this Wednesday night on Syfy, almost exactly one year since its first season began last January.

The show stars Alan Tudyk as the alien of the title. After he crash-landed, he took up residence in a remote lakeside cabin inhabited by this small mountain town’s only family doctor.

When the show began, the alien -- whose name is un-pronounceable to humans -- killed the doctor and assumed his identity.

The only problem was, this alien knew nothing about human life and culture -- language (English, in this case), customs, thinking, emotions and everything else.

So, for two weeks he took a crash course in human ways by watching television for hours on end. The show that exerted the biggest influence on him was “Law & Order,” likely due to its ubiquity.

Just like here in the real world, in the world of “Resident Alien,” some form of “Law & Order” is on TV somewhere just about 24 hours a day.

The “Law & Order” theme is taken up again as Season Two begins this week. Without giving much away, our alien friend (known to the townsfolk as “Harry”) awakens from a traumatic accident with no memory of who he is.

But he does seem to remember his close encounters with “Law & Order” reruns last season and, as a result, he comes to believe that he is Det. Lennie Briscoe, played long ago by the late Jerry Orbach.

Such is the influence that TV has on this alien, whose behavior bears similarities to our own. Many of us also watch TV for hours on end, and we are deeply influenced by it too (otherwise, there would be no advertising component to TV, right?).

Like Harry, TV’s scripted and unscripted shows, and hours of news and partisan, opinionated talk shows deeply affect those of us who consume a good deal of it.

What if the “Resident Alien” writers had chosen TV shows from the world of cable news for Harry to take his lessons on American language and lifestyles?

Perhaps he would have to choose between Rachel Maddow and Sean Hannity or adopt half of each of them. That would likely have confused him and everyone watching the show as well.

For the record, based on the Season Two premiere, the new season of “Resident Alien” figures to be as quirky and entertaining as the first.

Like last season, the show belongs in large measure to Alan Tudyk (pictured above) whose uncanny performance as this transplanted alien who is struggling to be human is right on the money.